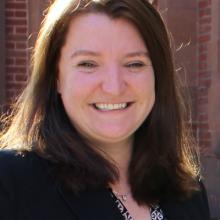 Lindsay Fulton is a nationally recognized professional genealogist and lecturer who joined American Ancestors/NEHGS in 2012, first as a Researcher and then as a Genealogist; now she leads the Research and Library Services team as Vice President. In addition to helping constituents with their research, Lindsay has also authored a Portable Genealogists on the topics of Applying to Lineage Societies, the United States Federal Census, 1790-1840 and the United States Federal Census, 1850-1940. She is a frequent contributor to the NEHGS blog, Vita-Brevis, and was featured in the Emmy-Winning Program: Finding your Roots: The Seedlings, a web series inspired by the popular PBS series “Finding Your Roots with Henry Louis Gates, Jr.  Before, NEHGS, Lindsay worked at the National Archives and Records Administration in Waltham, Massachusetts, where she designed and implemented an original curriculum program exploring the Chinese Exclusion Era for elementary school students. She holds a B.A. from Merrimack College and M.A. from the University of Massachusetts-Boston.