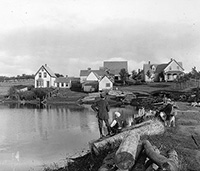 Prince Edward Island was originally a French colony, named Ils St. Jean or St. John Island, and was settled in the early 18th century by Acadians. Most of the Acadians were deported by the British in 1758 after the battle of Louisburg, but about 300 Acadian families stayed on the island by hiding out in the woods. In 1763, when the Treaty of Paris was signed, the island was officially turned over to the British. The island was divided up into 67 numbered lots and a lottery was held in 1767 to allocate the lots. The proprietors were required to pay quitrents (a tax or land tax) to the Crown and bring in 100 Protestant, non-British settlers within 10 years. However, the first settlers were Scottish Catholics and arrived in 1772. Subsequent waves of Scottish immigrants, both Catholic and Protestant, and Irish and English immigrants came to the island, largely between 1772 and 1841. This subject guide provides a list of key resources, records, and some background information to help you get results in your PEI research.

The Master Name Index (MNI) is a finding aide that includes abstracts of census records, obituaries, gravestone inscriptions, histories, and other resources. It’s a great place to start your research.

Available census records for Prince Edward Island generally cover the period of 1798 to 1911. Census records, dating back to 1728 also exist for the island when it was under French control (known as Ile Saint Jean). For more information on these earlier records and to view transcriptions, visit the Island Register website.

The information and coverage provided by the 1798 to 1911 census returns vary from year to year. The 1881 return was the first national census that included Prince Edward Island (the province having joined the Confederation in 1873) and all subsequent censuses occurred every ten years. Surnames, lots, and other data can be searched online at a variety of websites. The following census records are available for PEI:

There was no civil registration in PEI prior to 1906. In addition the following restrictions apply:

Microfilm copies are available at the PEI Public Archives and Records Office.

Marriage Registers, 1832–1888, FamilySearch.org
Images of indexes and registers are browsable on FamilySearch.org. Marriages took place in churches and before Justices of the Peace. Dates of indexes correspond to dates of marriages, and marriage records are arranged by date of registration, so the dates of the indexes and the marriage records do not always match. Indexes are alphabetized by first letter of the surname only. Note: In some indexes, the "Mc" and "Mac" names are indexed by the first letter after "Mc" or "Mac."

Death Card Index, 1721–1905, FamilySearch.org
Browsable images of a PEI death card index from 1721 to 1905 are available on FamilySearch.org. With only 3,428 images, the index greatly under-reports the actual deaths of this time period. Cemetery inscriptions are a better source. 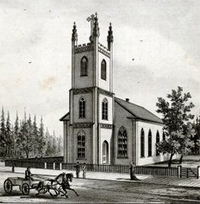 Since there was no civil registration in PEI before 1906, church records are the best alternative for genealogists. Baptism indexes are available on FamilySearch.org and also on the PEI Archives and Public Records website. Not all church records are in either database, and there are transcription errors. Copies of original church records should also be consulted.

PEI Baptism Card Index, 1721–1885, FamilySearch.org
This collection of 92,218 records provides an index of church records of baptisms and births. The baptism card index was created to provide pre-civil registration birth records. The earliest records date from 1751, but the majority date from 1830 onwards.

PEI Baptismal Index, gov.pe.ca/archives/baptismal
This PEI Archives and Public Records database of baptismal records was taken from existing church records from across the Island. In lieu of official birth certificates which were not issued until 1906, baptismal records provide information concerning individuals’ births and parentage. The database contains over 168,700 records which span approximately 1777 to 1923.

PEI Church Records, 1777–1985, FamilySearch.org
FamilySearch.org has 22,448 browsable images of some church records. They are arranged by community, and then by church.

Most residents of PEI did not own the land they lived on until after the land reform was implemented in 1875, so many deeds date from the later nineteenth century. Many earlier leases, however, were recorded with the Registry of Deeds. There are grantee and grantor indexes, 1769–1872. 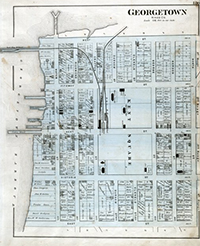 The Island Imagined, islandimagined.ca
The Island Imagined is an online collection of historic maps of Prince Edward Island. The collection features maps, atlases, books, images, and documents from various Prince Edward Island repositories. The site contains over 1,000 maps and features a digitized version of Meacham's atlas from 1880 (see below).

1863 Lake Map, islandregister.com/lakem/1863maps.html
This map shows the location of residents in 1863 and is available online on the Island Register website.

NEHGS has two atlases that show the occupiers of every farm in the province for 1880 and 1928: