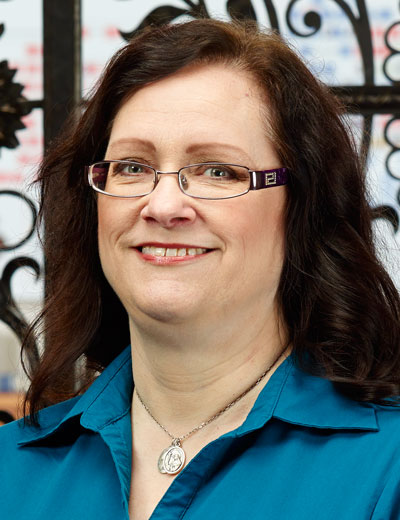 People researching their French-Canadian ancestors will be happy to find a wealth of resources and records available in both Canada and the U.S.—thanks in part to the work of earlier genealogists, including Joseph Drouin, Rev. Cyprien Tanguay, and René Jetté. However, French-Canadian genealogy is not without its quirks. This subject guide provides a listing of essential resources available at NEHGS and other repositories, information on locating and using records, and how-to tips. This guide focuses on the resources available for the region of Quebec. A subject guide for Acadian research will soon be available.

French Canadian Resources at NEHGS
Live broadcast: November 12, 2015
Presented by: Rhonda R. McClure
Level: Beginner - Intermediate Running Time: 1:10:58
Description: Learn what resources exist for French Canadian genealogical research and how to get the most out of them.

Miller’s Manual, A Research Guide to the Major French-Canadian Genealogical Resources, What They Are and How to Use Them by Douglas J. Miller
NEHGS, 4th Floor Microtext Reference CS83.M55 1997

Genealogy and Local History to 1900: A Bibliography Selected from the Catalogue of the Canadian Institute for Historical Microreproductions, CIHM by J. Brian Gilchrist
NEHGS, 4th Floor Microtext Books F1003.G45 1995

“The Genealogy Services at Library and Archives Canada, with an Emphasis on French-Canadian Resources” by Nicole Watier and Sylvie Tremblay, American Ancestors, Fall 2010, pp. 32–33

Until the late twentieth century, the churches within the province of Quebec registered vital records. The largest religious group in Quebec is the Roman Catholic Church. The first Catholic parish registers were for Notre-Dame de Québec, founded in 1621. Protestant records begin in 1766 with the founding of the first Church of England (Anglican) parishes in Montréal.

The Drouin Collection, contains millions of records for Quebec’s Catholic and Protestant churches and Jewish synagogues, which may begin in the 1600s and go until the 1940s. These records were microfilmed in the 1930s and 1940s by L’Institut Généalogique Drouin (the Drouin Institute) in Montreal and are available at NEHGS. Read more about the Drouin Institute and collection.

Digitized images of these records can also be browsed in the library of American-Canadian Genealogical Society. The registers are searchable on Ancestry.com as well as Genealogie Quebec. The Catholic Paris registers are also available on FamilySearch.org in a separate database: Quebec Catholic Parish Registers 1621-1979.

There are indexes to assist in searching the Drouin Collection, but only the marriages found in the Catholic registers are indexed on microfilm. To search Protestant registers, view the Drouin registers on Ancestry.com. Note: On Ancestry, the record may only be indexed by surname. 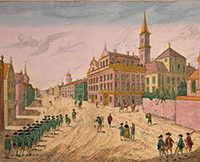 The main objective of the Programme de Recherche en Démographic Historique was to transcribe the parish registers of Ancient Quebec. It covers the 17th and 18th centuries and “contains the personal history of the Québec ancestors of all French-Canadians.” Read more about the PRDH.

www.genealogie.umontreal.ca/ is a pay-per-view website of the PRDH. A first-level search may be conducted for free, which will reveal a list of references. To view the individual references will require paying for “hits.” A fee schedule can be found on the website. Patrons within the NEHGS library can access the website's content at no additional charge.

Civil registration in Quebec was not begun until 1994. Prior to this, the province required the churches to send copies to the government archives. Records prior to 1900 are available in a variety of places and are open to anyone. For records after 1900, only the person named in the record or that person’s legal representative can gain access to the civil registration or civil copy of the church records. Read more about vital records in Quebec. To access these later records visit or contact: 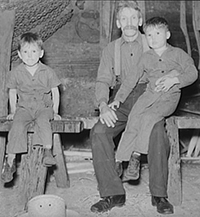 Because of the availability of church records, censuses and notarial records, several genealogical dictionaries have been compiled. Some of the most useful are: 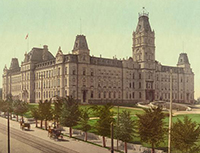 There are provincial and national census records. Many of these can be found online. Most of the censuses from 1792 to 1842 are known as “head of household” enumerations. Quebec was partially enumerated in the Lower Canada census of 1825, 1831, and 1842. Lower Canada then became known as Canada East, and the same southern Quebec areas were included in the 1851 and 1861 censuses of Canada East. NEHGS has all the censuses from 1666 to 1901 for Quebec on microfilm. Read more about the Canadian census.

Census of Part of the Province of Quebec
NEHGS, 4th Floor Microfilm HA741.C4 1765

The censuses from 1851–1911 are available online as follows:

Notarial records are records prepared by a notary and include a wide assortment of documents including property deeds. In early Quebec you will also find wills and marriage contracts as well, with the marriage contracts phasing out as you reach the mid-1800s. Among the documents, those that are most useful for researching your family history are:

While most land transfers between individuals were handled by the notaries, land grands, land petitions, and seigneurial records are the exceptions. Seigneurial records were the earliest of land grants from the Crown to the Seigneurs (Lords) who held them in servitude to the King. The land was not owned by the Lords, but they managed it (and the indentured servants hired to work the land). Through the “right of occupancy” they could eventually buy and sell the land.

FamilySearch – Quebec Land and Property
This is a wiki (or community website) which discusses the various land record options found in Quebec and includes links to resources available from FamilySearch.org.

One of the most difficult areas many researchers face when tracing their French-Canadian roots is discovering the actual names of their ancestors in Quebec. Read more about French-Canadian surnames in the United States, first names in French-Canada, and “dit” names.

Not surprisingly, the majority of records you’ll encounter pertaining to your French-Canadian ancestors will indeed be in French. Even if you are not fluent in the language the below word list will help you pick out key dates, events, and other information important to your genealogical research.