Make Your Own Pop-Up Card

Make your own pop-up card with simple materials from around the house. A popup in a card is where an element appears suddenly, or springs up, when you open the card. You can draw, write, or paint on pop-up cards. Watch the tutorial video and follow these easy steps to learn two different ways to create a pop-up in your own card.

Pages: You can use any of these for your card

Fold the paper for your card in half. You can use any size paper you want but if you are using standard 8 ½” x 11” paper, you can fold it along the long edge for a square shape, or along the short edge for a skinnier shape. 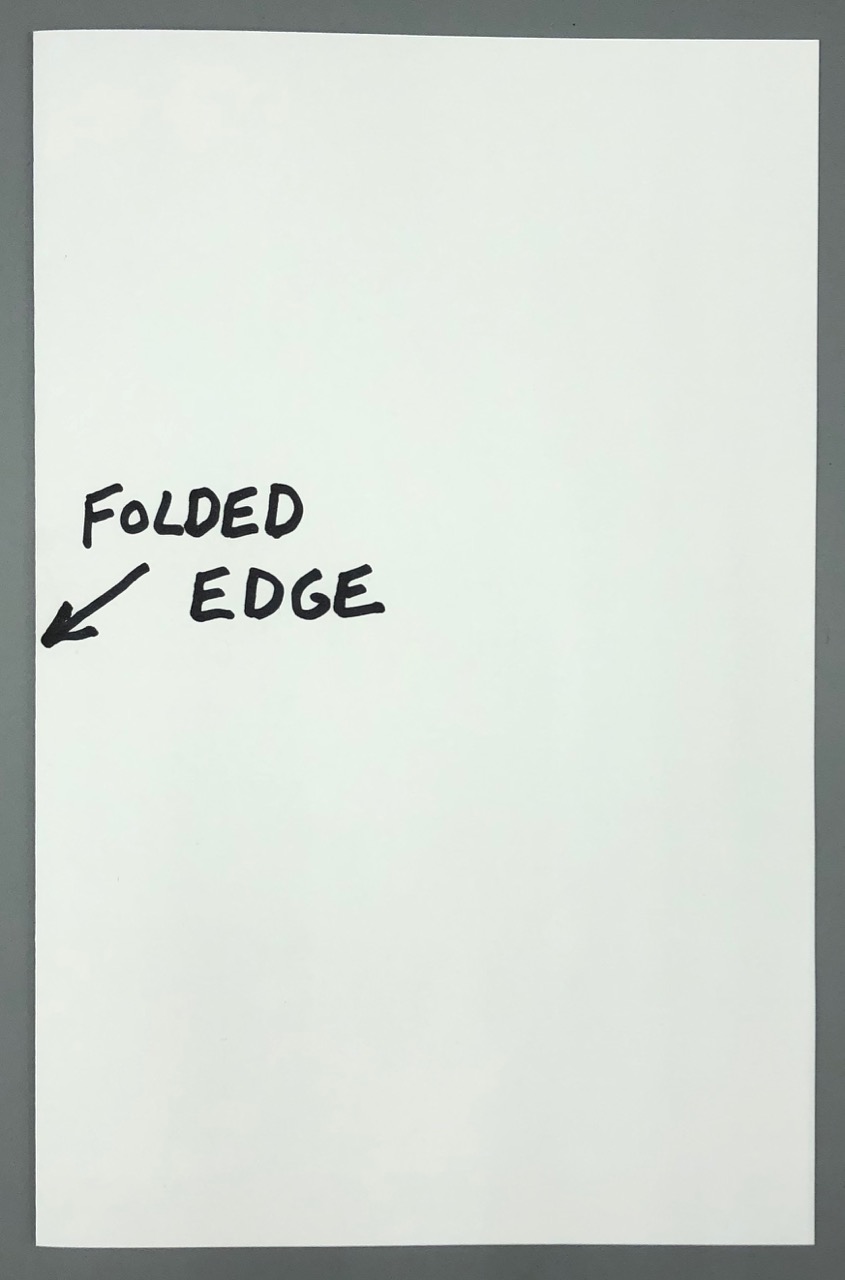 Step #1: Make a single cut in the folded edge somewhere near the center. This cut should be perpendicular to the fold and less than half of the width of the card. Fold back the paper at an angle on each side of the cut. 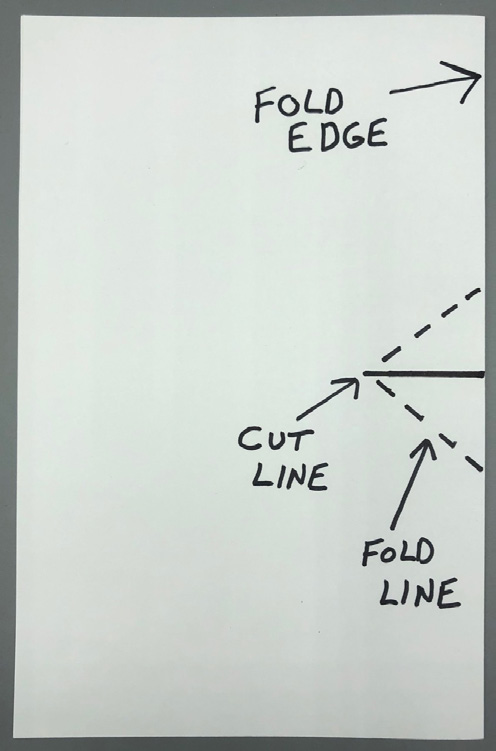 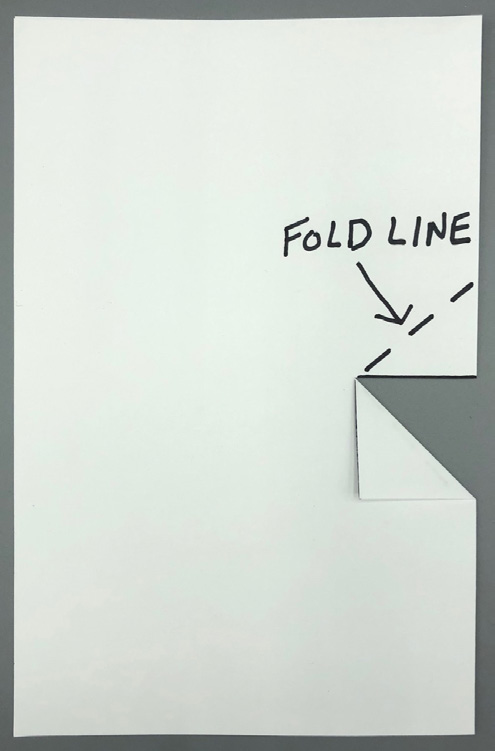 Fold back paper in one direction

Step #2: Fold the paper on each side of the cut back in the other direction along the same crease line. 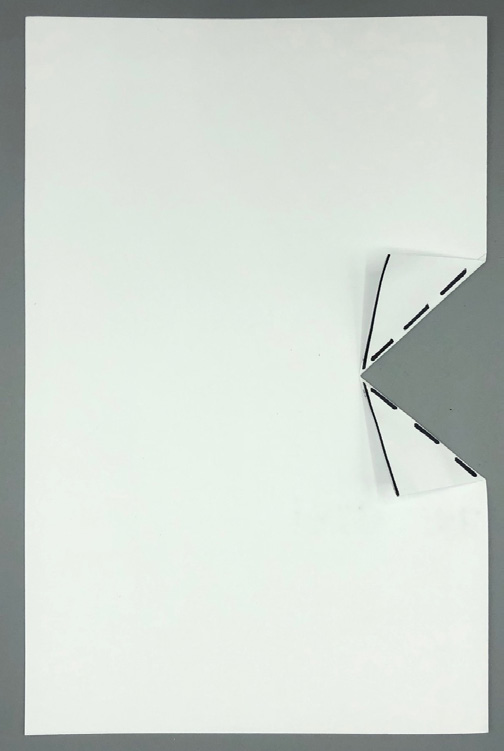 Paper folded back in other direction 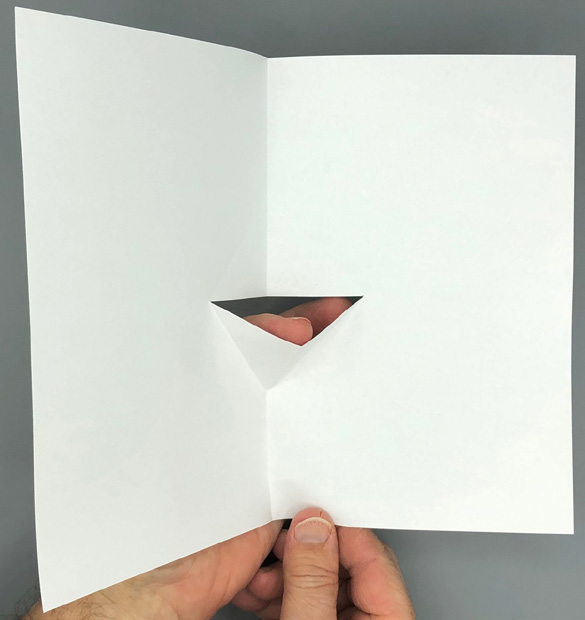 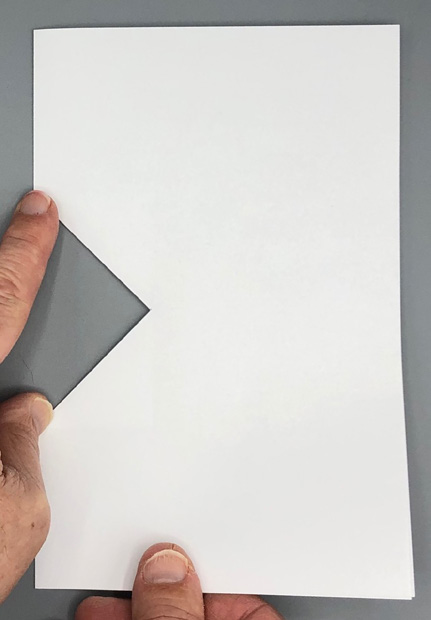 Fold back paper in one direction

Step #1: Make two cuts in the fold parallel to each other and perpendicular to the fold (make sure cuts are less than half of the width of the card). Fold back the paper in between the two cuts in both directions. 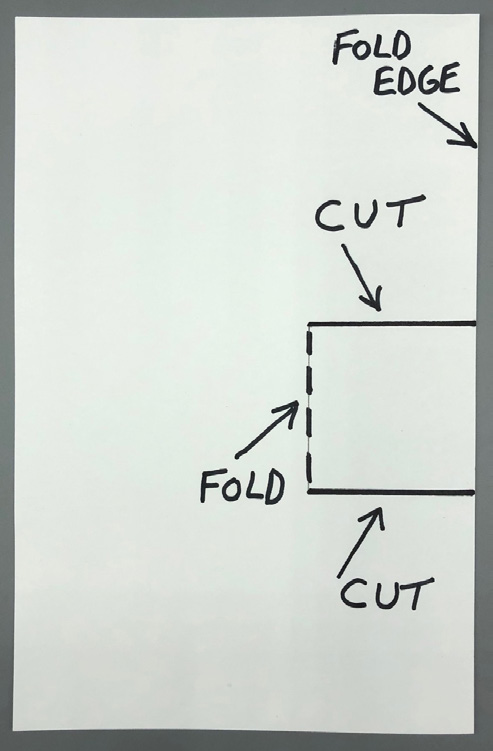 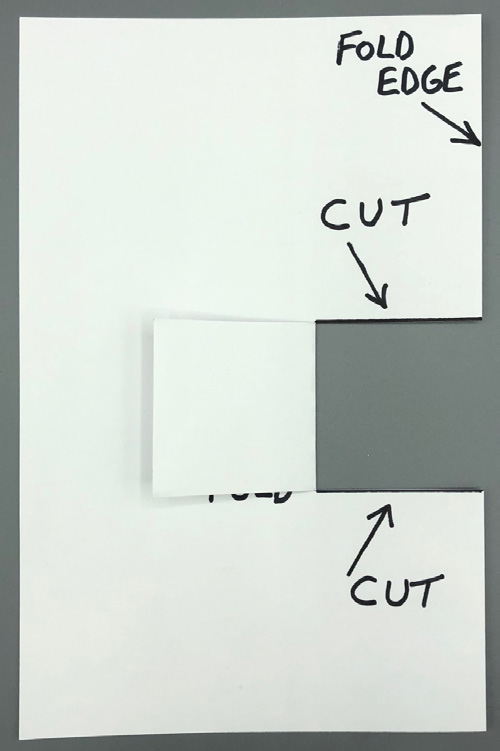 Cut the solid lines and fold the dotted line. Fold in both directions.

Step #2: Unfold the paper back to flat. Open the card and push the pop-up box out and fold the center fold in the opposite direction. After you close the card, press the folded areas again, and open it back up. The box should pop up. 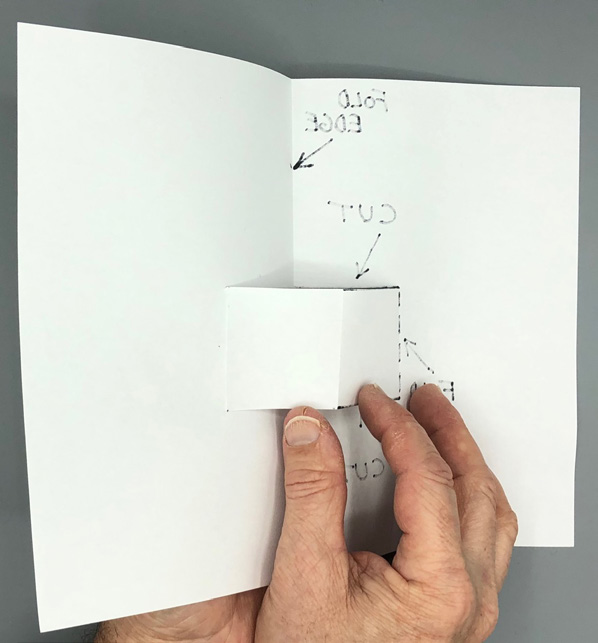 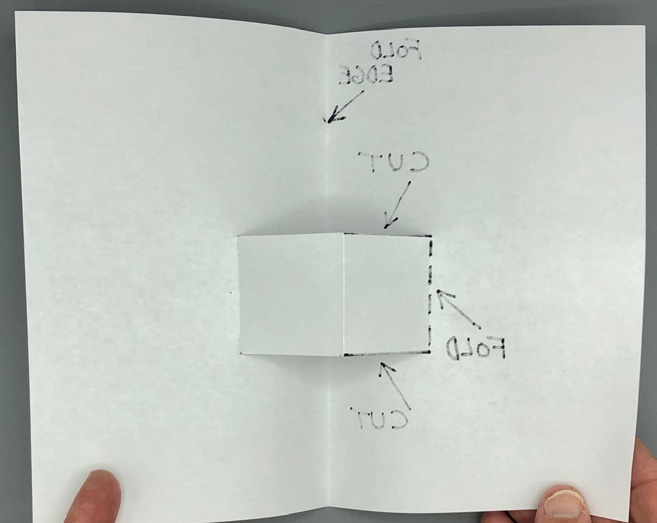 Open the card and push the pop-up area up

Get Creative: You have now learned two different pop-up techniques, so you’re ready to start making cards. To decorate your card you can write, draw, sketch, paint, or anything else you would like to make your card unique. Be creative and have fun!

Here are three quick ways to do more to your pop-up card. 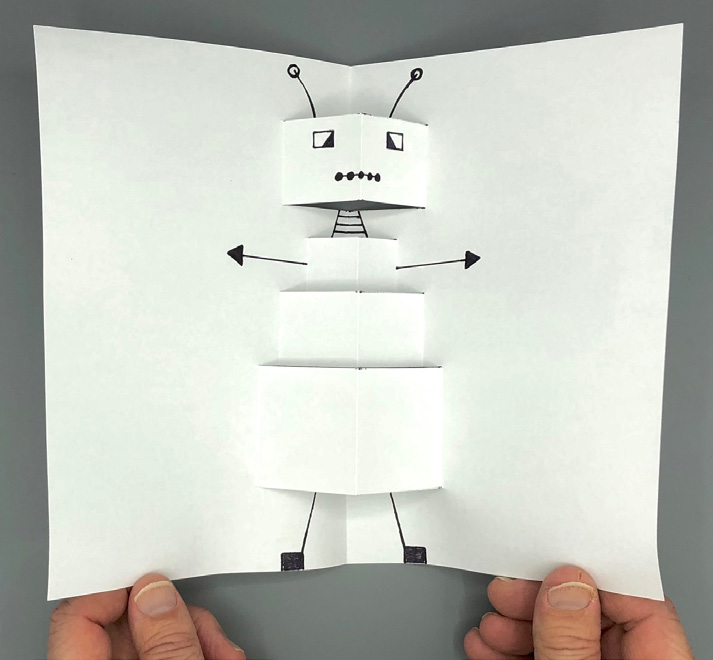 Use a separate cover and create a background: Add a second folded paper to your card as a cover. You can decorate the outside of the cover and add drawings or color to the inside of the cover that will be visible when the pop-up card is opened. After decoration attach the two papers together with a spot of glue in the corners to finish the card. 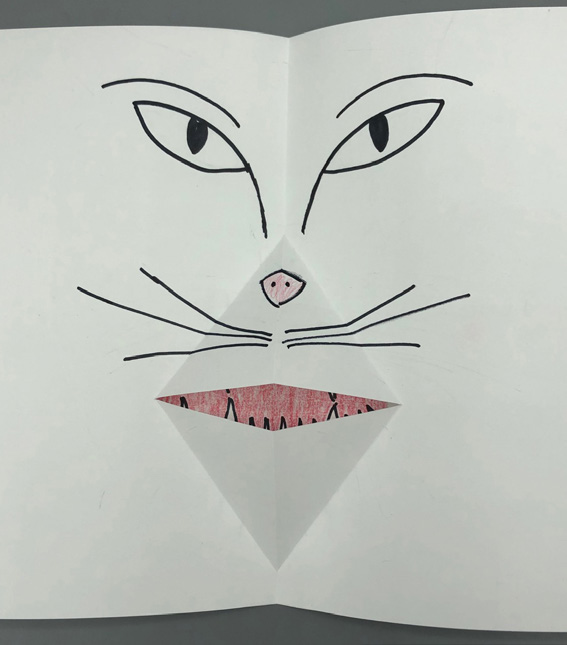 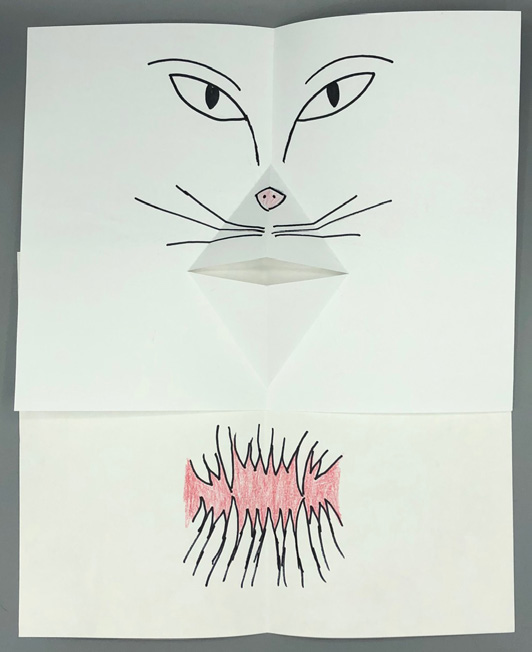 Folded cover is behind pop-up card. Drawing on inside of the cover 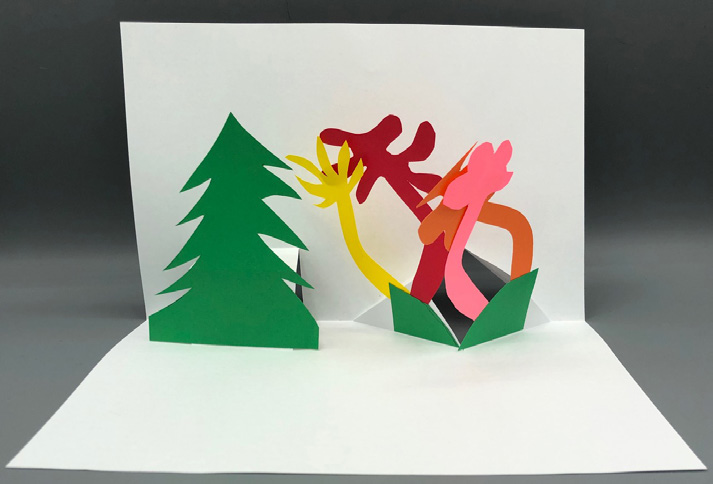 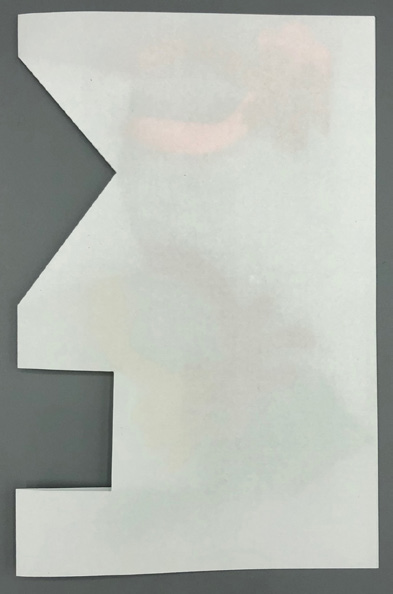 Added material to a box and mouth pop-up. Make sure material doesn’t extend beyond card edges.