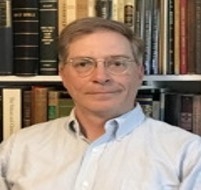 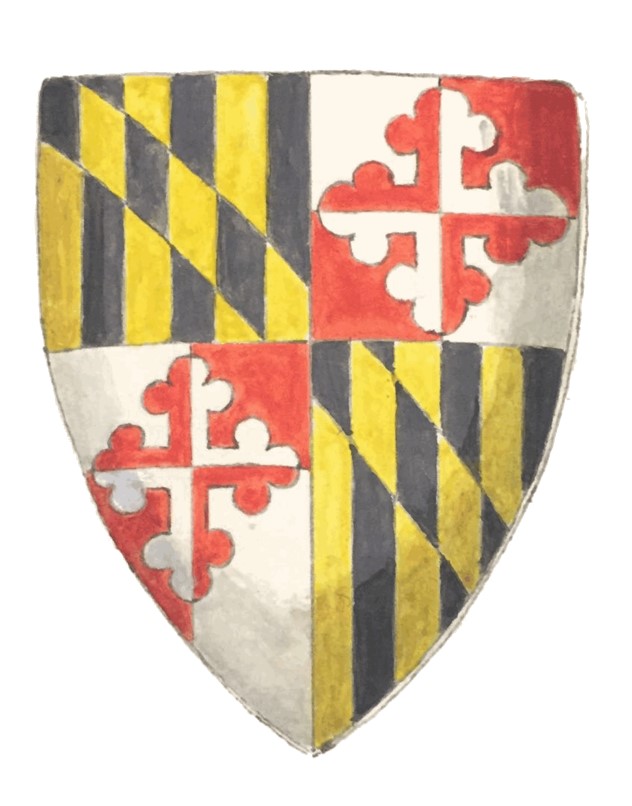 Heraldry is a sister discipline to genealogy. Coats of arms—inherited graphic designs on a shield—have been used as signals of personal identity from the Middle Ages to the present. Because they are inherited, they can be indicators of a particular ancestry, connecting anyone who uses a particular coat of arms with the ancestor who originally bore it. There are many resources available for the study of heraldry as an art form, both to create heraldic art and to interpret and appreciate heraldry. This guide instead focuses on genealogical resources to interpret American heraldry, mostly in reference to its origins in the English or British systems of heraldry.

Introduction to Heraldry in America
Live broadcast: September 28, 2017
Presented by: Nathaniel Taylor, PhD, FASG, Vice Chairman of the NEHGS Committee on Heraldry
Running Time: 1:05:26
Description: Heraldic symbols are all around us from state seals to institutional emblems to family heirlooms. Yet the significance behind these cultural and familial symbols is often misunderstood. Discover the history of heraldry in America from colonial times to present day. Join esteemed Vice Chairman of the NEHGS Committee on Heraldry Nathaniel Lane Taylor, PhD, FASG to learn how heraldry can enrich your family history research.

Achievement: An achievement is a complete heraldic representation containing not only the coat of arms, but also the various other elements of heraldic display that belong with the coat of arms (crest, mantling, coronet, supporters, motto, etc.).

Cadency: Symbols added to an original coat of arms to designate junior family members, such as younger sons. A form of differencing.

Coat of Arms: Heraldic design on a shield (or a flag); note this is not the same as a crest.

Coronet: Symbol of rank used in an achievement of arms.

Crest: A separate, but complementary design depicted above the coat of arms in many achievements. Sometimes used alone in place of a coat of arms.

Differencing: Because arms must be unique and not identical among family members, differencing uses shapes or other motifs to distinguish between brothers (example: a star for a third brother, a ring for the fifth, etc.).

Furs: Refers to a pattern used in a coat of arms such as Ermine, Ermines (inverted ermine colors), or Vair (squirrel).

Heraldry: 1) Heraldry is the graphic representation of an individual or family (a “coat of arms”) that is on a shield or other conventional military-derived shape (like a flag, or surcoat worn over armor); is heritable according to specific customs (which differ in different European countries); has recognizable graphic design elements: combination of colors, shapes, or depictions of animals or things. 2) Refers to anything having to do with heralds.

Impaling: Dividing a shield in half to show a husband’s and wife’s arms.

Mantling: Cape-like cloth around and above the shield in an achievement of arms.

Metals: Refers to the standard metals represented in a coat of arms—gold (yellow) and silver (white).

Motto: Slogans, sometimes written in a scroll at the top or bottom of an achievement of arms, that, like the the coat of arms and crest, are considered to belong with that coat of arms. Mottos do not have to be unique.

Ordinaries: Geometric shapes and divisions on a shield indicated by contrasting colors.

Quartering: A division of a shield to show descent from other families whose arms you’re entitled to bear, as well as your paternal arms.

Supporters: People or creatures supporting or holding up a shield.

Tinctures: Refer to the standard colors used in a coat of arms—red, blue, black, green, and purple. 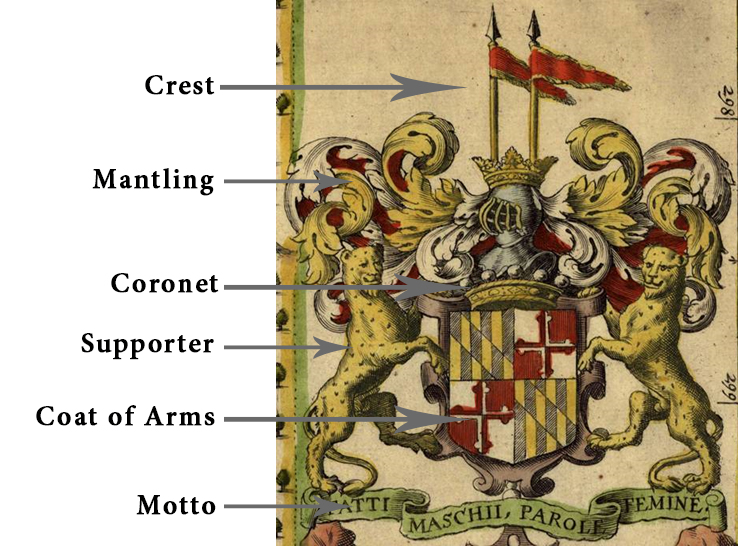 There are many general introductions to heraldry generally published in the last hundred years. Some of the best are:

"Heraldry" by Harold Bowditch in Genealogical Research: Methods and Sources, 2 vols. edited by Milton Rubincam
NEHGS, 1st floor and 7th Floor CS16.G43 1980
A chapter which is the most recent authoritative guide to heraldry by an American genealogical expert.

Boutell's Heraldry by John Brooke-Little
The latest of many editions of a standard work explaining heraldry in the English context. The best way to begin to understand blazon, the language of heraldry, is systematic study one of the traditional works like this one.

Researching Coats of Arms or Families with Heraldry 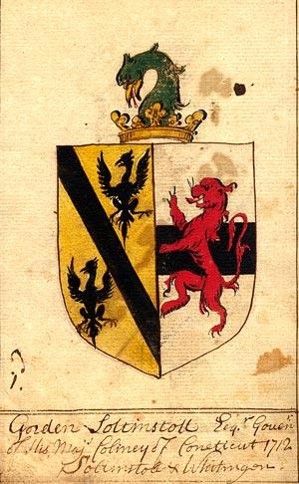 There are many books including lists of coats of arms borne by people or families, including colonists or American families. A problem with almost all of them is that they offer no proof of the authenticity (right by descent) of the arms.

A Roll of Arms Registered by the Committee on Heraldry, Parts 1–10, edited by Henry L. P. Beckwith
NEHGS, 7th Floor CD1217.N4 2013
A register of 741 authentic coats of arms of American immigrants, reprinted in one volume with valuable introductions and commentary. Further publication of the Roll is planned. Individual entries name the immigrant ancestor but do not give full genealogical details. Presence in the Roll should reassure the reader that published genealogical work will confirm entitlement to a coat of arms by descent. Some entries are corrected or even canceled at the back of the book.

Great Migration Directory: Immigrants to New England, 1620–1640: A Concise Compendium by Robert Charles Anderson
NEHGS, 7th Floor F& .G745 2015
For New England families who arrived by 1640, this is an important first step to consult: if the immigrant’s place or family of origin is listed as “unknown,” then that family has essentially no proved right to a coat of arms, and the arms probably cannot be considered as clues to the origin of the family.

Heraldic Journal, 4 volumes, 1862–1865
NEHGS, Rare Book Collection CS42 .H42; also available at archive.org
Although it is very old and short-lived, this journal (edited by members of the Committee on Heraldry) is full of still-valuable original research on early American families and their use of heraldry on seals, early gravestones, and in other contexts.

Bolton's American Armory by Charles Knowles Bolton
NEHGS, 7th Floor CR1209 .B6 1927; also available at archive.org
A directory of Americans with coats of arms (but not illustrated) with emphasis on description of heraldic artifacts belonging to that family.

Crozier’s General Armory: A Registry of American Families Entitled to Coat Armor by William Armstrong Crozier
NEHGS, Vault CR1209 .C82 1904; also available at archive.org
Despite the precise title, appearance in this book cannot be taken as proof of genealogical descent, since many entries rest on bad genealogy or disproved claims.

The Gore Roll of Arms by John Gore
NEHGS, Manuscripts; also available as a database on AmericanAncestors.org
An heraldic roll of arms manuscript compiled beginning in the 1730s by Boston herald painters John Gore and his son Samuel Gore, the "Gore Roll" is a gorgeous painted roll of arms including both authentic arms and those which cannot be authenticated. The coats of arms, along with commentary by Committee on Heraldry Secretary Harold Bowditch, offer a snapshot of the semi-authentic world of Boston heraldry in the late colonial period.

British Resources for tracing coats of arms before immigration 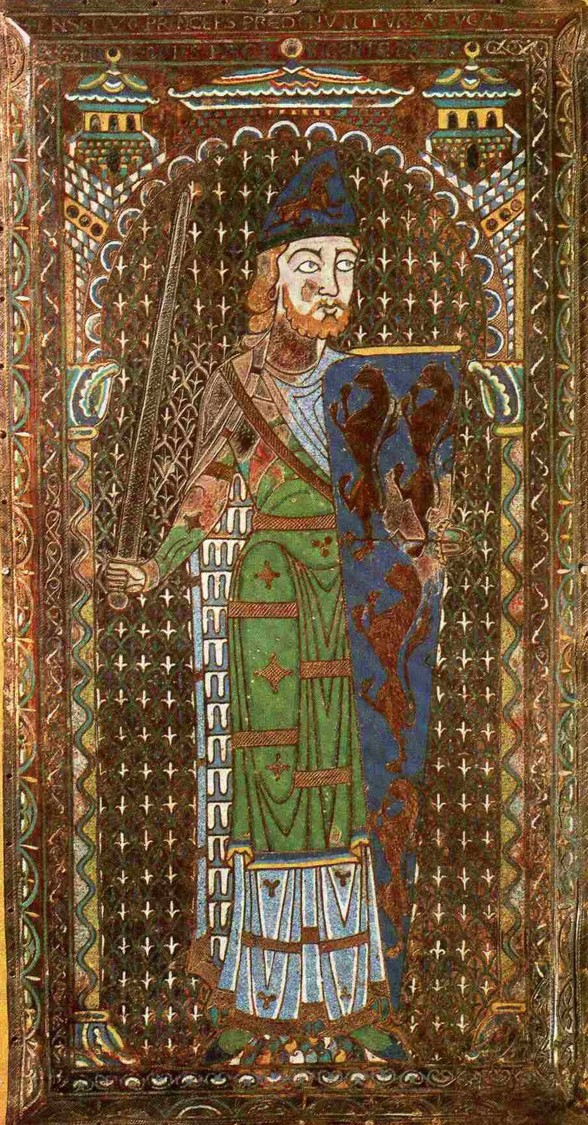 The General Armory of England, Scotland, Ireland, and Wales by Bernard Burke
NEHGS, 7th Floor CR1619 .H86 1974
A standard enormous dictionary of who bore what coat of arms, arranged by surname. There are no citations to any sources, and, often, little indication of the time frame of the individual coat of arms. There are eleven pages of coats of arms for people named Smith. No illustrations.

An alphabetical dictionary of coats of arms belonging to families in Great Britain and Ireland, 2 vols. by John W. Papworth
NEHGS, 1st Floor CR1619 .P21 1965
Comprehensive encyclopedia of British coats of arms arranged by their blazon (formal language describing the coat of arms). Not illustrated, and must be used with a knowledge of the language of blazon and an understanding of how description of a coat of arms is arranged hierarchically.

Dictionary of British Arms: Medieval Ordinary, 4 vols. by Hubert Chesshyre, Thomas Woodcock, and Sarah Flower
NEHGS, Vault
The definitive modern complement to Papworth’s Ordinary, with comprehensive listings of all coats of arms appearing in heralds’ manucripts and other sources from before the visitation period (1530–1688).

Display of Heraldry by John Guillim
NEHGS, Vault; also available at archive.org
The classic first resource with coats of arms of individuals which can be found by using the surname index at the back. The sixth edition, with its index of every name whose arms are described or illustrated in the book, was clearly a source for producers on demand of same-name arms.

Armigerous Ancestors: A Catalogue of Sources for the Study of the Visitations of the Heralds in the 16th and 17th Centuries by Cecil R. Humphery-Smith
NEHGS, 1dt Floor CS419 .H86 1997
A comprehensive book, includes indexes of Visitation pedigrees for every county in England and Wales, and many other related resources.

A list of published individual English heralds’ visitations (arranged by English county or shire), with links to online editions of them, is available at Christopher Phillips Medieval Genealogy website.

Armorial Général by Johannes B. Rietstap
NEHGS, 1st Floor CR1179 .R52
No illustrations, textual blazon only, but like Burke’s General Armory, an enormous collection listing coats of arms by surname for families through Continental Europe. A starting point for any coat of arms from outside the United Kingdom.

Committee on Heraldry, committeeonheraldry.org
Information on the criteria for inclusion of authenticated arms can be found in the Roll of Arms. View the index.

American Heraldry Society, americanheraldry.org
Not primarily a genealogical site, but an excellent organization devoted to the study of many aspects of heraldry including history and design. Sections include “An American Heraldic Primer” and a series of excellent essays on "Arms of the Presidents"by Joseph McMillan, a member of the NEHGS Committee on Heraldry. An excellent list of links to American and foreign governmental heraldic authorities and interest groups is in the “Heraldry Links” page.

Court of the Lord Lyon, lyon-court.com
The Scottish government office responsible for heraldry in England, Wales, and Northern Ireland.

Chief Herald of Ireland, nli.ie/en/heraldry-introduction
This office is part of the National Library of Ireland and provides information on modern Irish coats of arms.