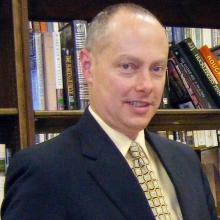 Kelsey is a native of Pennsylvania and a graduate of Elmira College with a B.S. in Business and Marketing. His interest in genealogy and history began at an early age, joining the Mayflower Society in 1980, the Huguenot Society of America in 1985 and The National Society of the Sons of the American Revolution in 1985. In addition, Kelsey serves on several museum and historical society boards. He has lectured on various topics and written many articles for publications, including Loyalist Plantations on the Susquehanna, Exploring the Wysocton Capture, and most recently Catharine, The Legend, The Legacy, Life Before the Sullivan and Clinton Expedition.

His expertise includes the Middle Atlantic States and Loyalist families in Pennsylvania and their relocation to Canada. Kelsey headed up a public-private economic development partnership in the Finger Lakes of New York for many years, where he also worked on developing a commercial historic district in Watkins Glen, which was listed on the National Register of Historic Places in 2012. He has also served in management roles for financial and investment firms. In his spare time he travels as a judge for the Australian Shepherd Club of America. He and his family live on a sheep and horticulture farm.