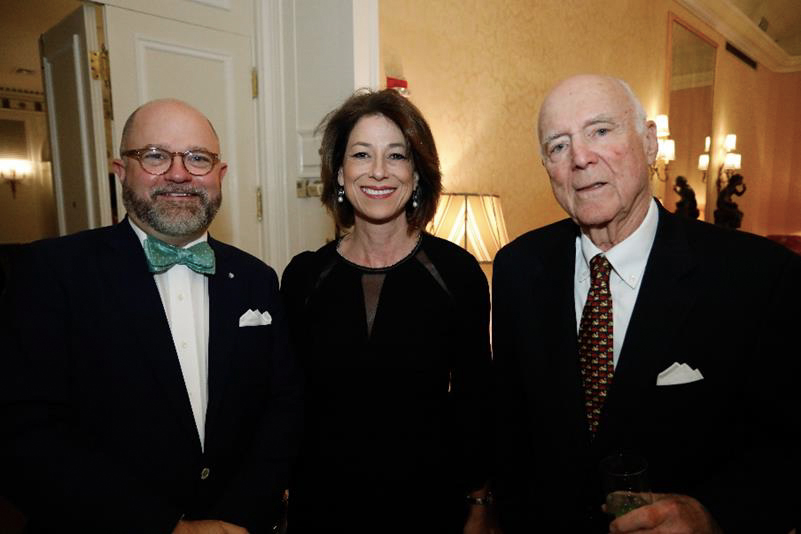 Boston, MA——November 16, 2018——The Jewish Heritage Center at New England Historic Genealogical Society (NEHGS), the premier resource for exploring and preserving the histories of Jewish families and institutions in New England and beyond, will henceforth be named in honor of Justin Lawrence “Jerry” Wyner and his wife Genevieve Geller Wyner, for their far-reaching vision and support. The announcement was made by Brenton Simons, NEHGS President and CEO, at a recent gala honoring the Wyners held at Boston’s Ta Hotel.

The newly-named Wyner Family Jewish Heritage Center at New England Historic Genealogical Society, located in Boston’s Back Bay, has been the collective work of many individuals and institutions over the past decade, and the Wyners have been the visionary force behind it. In 2010, NEHGS and the American Jewish Historical Society (AJHS), of which Justin Wyner has been a board member and president, created a collaboration to provide a permanent home for the valuable New England Archives (NEA) of the AJHS collection. With growing interest in Jewish family historical research and increased use of the archives, custodianship in perpetuity of the AJHS–NEA collection was granted to NEHGS, and the Jewish Heritage Center was officially established in November of 2017. This fall, Mr. and Mrs. Wyner made the lead gift to launch a new multi-million-dollar initiative to build the Center’s endowment.

The Center is home to the records of the Hebrew Immigrant Aid Society–Boston, the archival records of the Combined Jewish Philanthropies, the Boston Jewish Times newspaper collection, as well as the personal papers of some of the region’s most prominent Jewish citizens and institutions. In total, more than 1.2 million documents have been digitized as part of an ongoing project to make the records accessible to the public online.

In his announcement of the Center’s new name at the gala, titled “L'dor Vdor” (Hebrew for “from generation to generation”), NEHGS President Simons stated: “Tonight we honor Genevieve and Jerry Wyner for their tireless work in preserving Jewish history. Their unwavering dedication over the decades has ensured that the collections of the American Jewish Historical Society–New England Archives have been safeguarded and nurtured. And now, their visionary work and profound generosity has transformed this collection. They have founded an even larger Center that will, in addition to digitizing archives, take important new strides in educational programming and engage with the community in meaningful ways. They have ensured that this work will continue from generation to generation.”

Among the many tributes offered to the Wyners, Dr. Jonathan Sarna, University Professor and the Joseph H. & Belle R. Braun Professor of American Jewish History at Brandeis University, spoke of Jerry Wyner’s extraordinary stewardship and advocacy, over many years, of the archival collection at the core of the Center’s resources. “Now, in his tenth decade, Wyner continues to make certain that our collective Jewish heritage here in Boston is preserved,” Sarna said.

At the event, Rachel King was introduced as the new Director of the Wyner Family Jewish Heritage Center. Formerly at the Jewish Women’s Archive, King remarked, “I’m excited for this next chapter of the Wyner Family Jewish Heritage Center, as it opens its doors wide and introduces new generations to their heritage.” As part of the growth she outlined, the Center is planning to expand its collections, increase its programming and outreach, and buildpartnerships within and beyond the Jewish community. The newly-launched endowment initiative, as well, provides an important opportunity for the community to invest in preservation, education, and access to the vital Jewish history of the region and beyond.