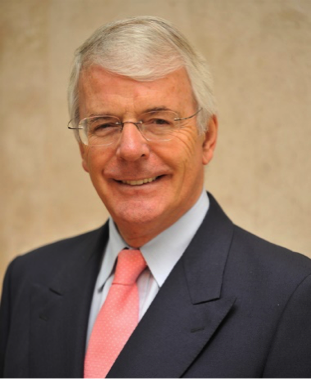 October 9, 2019—Boston, Massachusetts—Former UK Prime Minister Sir John Major will visit Boston next April to commemorate the 400th anniversary of the landing of the Mayflower, and the 175th anniversary of New England Historic Genealogical Society (NEHGS), also known as American Ancestors, founded in Boston in 1845, the oldest genealogical society in the world.

Sir John will receive the prestigious NEHGS Lifetime Achievement Award for Distinguished Public Service to be presented at a dinner event in April that will be part of the commemorations of the 400th anniversary of the Mayflower landing in New England. The arrival of the Pilgrims in 1620 sparked the first waves of major English settlement in New England, and the Mayflower Compact signed by the Pilgrims at Provincetown Harbor is regarded by many historians as a key inspiration in shaping American democratic ideals. As many as 10 million Americans and 35 million or more people worldwide are believed to be descended from the Pilgrims.

“We are delighted to welcome Sir John Major to Boston and our Mayflower commemorations next year,” said Brenton Simons, President and CEO of American Ancestors and NEHGS.

In 1990, John Major succeeded Margaret Thatcher as Prime Minister of the United Kingdom and served in that capacity until 1997. He oversaw Britain’s longest period of continuous economic growth and the beginning of the Northern Ireland peace process. “He is a statesman and an important voice not just in the United Kingdom, but in the world,” stated Nancy S. Maulsby, of Greenwich, Connecticut, Chairman of the NEHGS Board of Trustees. Prior to becoming Prime Minister, Sir John served in the Thatcher Government as Foreign Secretary and Chancellor of the Exchequer. In 2005, he was made a Knight Companion of the Most Noble Order of The Garter by The Queen.

“This is truly an international event, and Sir John’s participation highlights the many important historical, cultural, and political bonds between the United Kingdom and the United States over four centuries,” said Simons, a member of Governor Charles D. Baker’s Plymouth 400th Anniversary Commission and a board member of Plymouth 400, the nonprofit organization developing numerous commemorative programs throughout the Commonwealth in 2020.

Four nations—the United States, the United Kingdom, the Netherlands, and the Wampanoag Nation—have united to create commemoration plans for the 400th anniversary of the Mayflower landing. NEHGS, located in Boston, is an anchor location for Mayflower and Wampanoag history-themed programming, tours, and activities that began last year and will continue throughout 2020. Its commemorative plans range from educational programs developed with Plymouth 400 to publishing new scholarship on the Pilgrims and, with the General Society of Mayflower Descendants and FamilySearch, providing the largest online portal for Mayflower genealogical research ever created.

NEHGS—known to many as American Ancestors—is the world’s largest nonprofit society dedicated to family history, serving more than 260,000 members and millions of online users with 1.4 billion records at AmericanAncestors.org.

Note to Editors: An official biography of Sir John Major, provided by his office, is attached to this release. A high-resolution JPG image of his portrait, Copyright Office of The Rt Hon Sir John Major KG CH, is available by contacting Jim Power, Communications Manager for American Ancestors, at jim.power@nehgs.org, or telephone 617.226.1261 (office) | 508.367.8058 (mobile).

Sir John entered the British Parliament in 1979, and joined Margaret Thatcher’s Cabinet in 1987. Between 1989-1990 he served as Secretary of State for Foreign and Commonwealth Affairs, and Chancellor of the Exchequer. He became Prime Minister in November 1990 and, in 1992, led the Conservative Party to an unprecedented fourth term in Office.

As Prime Minister, Sir John focused his efforts upon securing peace in Northern Ireland and upholding Britain's position in the world community as a political, social and economic leader. He was Prime Minister throughout the first Gulf War and, at home, instigated long-term reforms in education, health and public services. On leaving Office in 1997, he handed over the strongest economy any incoming UK Government had inherited.

Sir John retired from Parliament at the UK General Election in May 2001. His business interests include Senior Advisor to Credit Suisse and Chairman of the Advisory Board of Global Infrastructure Management. He chairs the Campaign Board of King’s London; is a Joint President of Chatham House; and Patron or President of a number of UK and international charities. In October 2011, he was appointed Chairman of The Queen Elizabeth Diamond Jubilee Trust, a Commonwealth-wide initiative which was established to create a lasting legacy to Her Majesty’s 60 years as Sovereign.

In 1999, Sir John was awarded the Companion of Honour by HM The Queen, in recognition of his initiation of the Northern Ireland Peace Process. In 2005, HM The Queen appointed him a Knight Companion of the Most Noble Order of the Garter, England’s highest award for chivalry. In 2012, he was awarded The Grand Cordon of The Rising Sun by The Emperor of Japan.