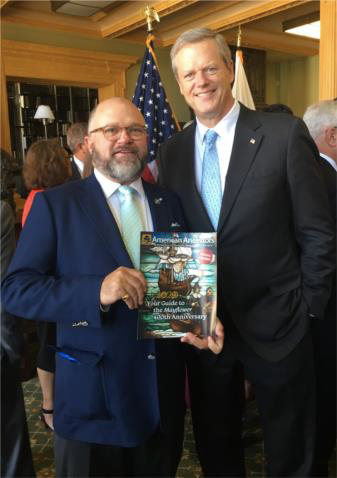 March 5, 2020—Boston, Massachusetts—Massachusetts Governor Charles D. Baker has appointed Boston nonprofit executive Brenton Simons as the Vice Chair of the State Commission tasked with organizing commemorations of the Plymouth 400th anniversary this year. Since 2005, Simons has served as President and CEO of the nation’s largest genealogical society, New England Historic Genealogical Society (NEHGS)–American Ancestors. The organization, founded in 1845, has grown exponentially during his tenure ― now serving more than 325,000 members and millions of online users with 1.4 billion searchable online names.

Dusty Rhodes of Conventures serves as Chair of the Commission, formed in September 2016 by the two-term, Republican Governor of the Commonwealth of Massachusetts to ensure a befitting national and state observance of the settlement of Plymouth Colony in 1620. “I’m delighted that Brenton has accepted this appointment as the new Vice Chair of the Commission,” said Rhodes. “He brings talent, vision, and an enthusiastic team spirit to the organizational efforts of this important leadership group—charged with creating a commemoration which is a true reflection of Massachusetts’ rich history and diverse cultural contributions.”

“I am honored to serve. I greatly look forward to helping Dusty Rhodes and the Commission provide citizens of the Commonwealth and guests from around the world with commemorations that meaningfully reflect on the legacies of this pivotal moment in history,” said Simons. “As many as 35 million people around the world descend from the Pilgrims, so this milestone is important,” he continued.

In his role as the head of NEHGS, Simons has developed a multi-pronged approach to the 400th anniversary by developing high profile events including the 2020 Gala on April 22, 2020, commissioning the publication of groundbreaking new Pilgrim history books, hosting exhibitions and history tours in the United States and the United Kingdom, and developing a major online database partnership that will bring millions of Mayflower family lineage names online for the first time.

Mayflower.AmericanAncestors.org features authoritative biographies of all known Mayflower passengers and crew as well as an online gallery where the public can post self-portraits and stories of their Mayflower connections. Together with the General Society of Mayflower Descendants and FamilySearch, NEHGS is developing new online content that will give access to records never available before.

Simons has invited former UK Prime Minister Sir John Major to visit Boston to commence the 400th anniversary commemorations and receive a lifetime achievement award at the 2020 Gala on Wednesday, April 22, 2020, preceding the international opening ceremonies to be held in Plymouth on Friday, April 24.

Simons and the NEHGS staff have overseen the publication of a host of new books for the 400th anniversary, including The Mayflower 500: Five Hundred Notable Descendants of the Mayflower by Gary Boyd Roberts. The Mayflower 500 gathers all the famous descendants of the Pilgrims together in a single volume and documents the Mayflower lineages of multiple Presidents (and two presidential candidates), tycoons, innovators, and entertainers, including John Adams, Franklin Delano Roosevelt, Warren Buffett, Katharine Hepburn, Jane Fonda, Taylor Swift, former Governor Bill Weld, and Mayor Pete Buttigieg. The genealogical society also serves as publisher of Mayflower Descendant, a biannual journal of Pilgrim genealogy and history.

Simons’s organization is also the sponsor of the 400th anniversary edition of William Bradford’s Of Plimoth Plantation, which will be published this spring, and is co-sponsor of the official Salute to the 400th Anniversary event at the Massachusetts State House on Beacon Hill on September 14.

Nancy Sands Maulsby, Chairman of the Board of Trustees of NEHGS and American Ancestors, has worked side-by-side with Simons for several years, planning the major events that NEHGS is undertaking to mark the Mayflower 400th commemorative year. Maulsby commented, “Brenton is the ideal appointment to serve as Vice Chair of the Governor’s Commission. His vast knowledge of this time in our nation and the Commonweath’s history and his attention to detail will ensure that everything is accomplished smoothly and in a timely manner. It will be an endeavor to be proud of for years to come.”

Simons also serves as a board member of Plymouth 400 Inc., the nonprofit organization managing commemorative events throughout the year, including the opening ceremonies on April 24, an Official Maritime Salute to the 400th in June, and an Indigenous History Conference and Powwow at Bridgewater State University in October.

Michele Pecoraro, Executive Director of Plymouth 400 Inc., stated “Brenton Simons has been a good friend and valuable contributor on the Plymouth 400 Board of Directors. His spirit of collaboration, his expertise in genealogy, and his personal passion for Plymouth history will be an asset as he joins the leadership of the State Commission.”

For Simons, involvement in the 400th anniversary commemorations is deeply personal ― he is descended from several Mayflower passengers, including Governor William Bradford (three times over), John Howland, John Tilley, and Richard Warren. For several years, he has delivered William Bradford’s “one small candle” passage in a period costume created for him by Plimoth Plantation at the Illuminate Thanksgiving festivities held every November in Plymouth, Massachusetts. Likewise, Simons is keenly interested in seeing the region’s Native American history receive greater attention as a part of the commemorations. In 2018, NEHGS hosted the Boston launch of Plymouth 400’s traveling exhibit, Our Story: 400 Years of Wampanoag History, and an exhibit on the history of Wampum, created by Smoke Sygnals, is currently on display at the organization’s Back Bay headquarters.

On November 9, 1620, the Mayflower arrived at Provincetown Harbor with 102 passengers and crew and on November 11, forty-one adult male colonists, including two indentured servants signed the Mayflower Compact, a document considered to be foundational in American democracy. The 400th commemorations recognize both the unique contributions of the Pilgrims to American history and genealogy ― as many as 35 million people may descend from them ― and the often overlooked history of the Wampanoag people whose legacy is being shared as an active part of the commemorations.

American Ancestors, also known as New England Historic Genealogical Society (NEHGS), with its national headquarters located in Boston’s Back Bay, is the oldest and largest genealogical organization in America. It serves more than 325,000 members and millions of online users engaged in family history nationally and around the world. It is home to a world-class research library and archive and an expert staff. American Ancestors offers an award-winning genealogical research website at AmericanAncestors.org with more than 1.4 billion searchable online names and maintains a publishing division which produces original genealogical research, scholarship, and educational materials, including Mayflower Descendant, a biannual journal of Pilgrim genealogy and history.