A Newly-Annotated Edition of Governor William Bradford’s Account of Plymouth Colony, Published by American Ancestors and the Colonial Society of Massachusetts, Provides New Perspectives on Colonization and Conflict 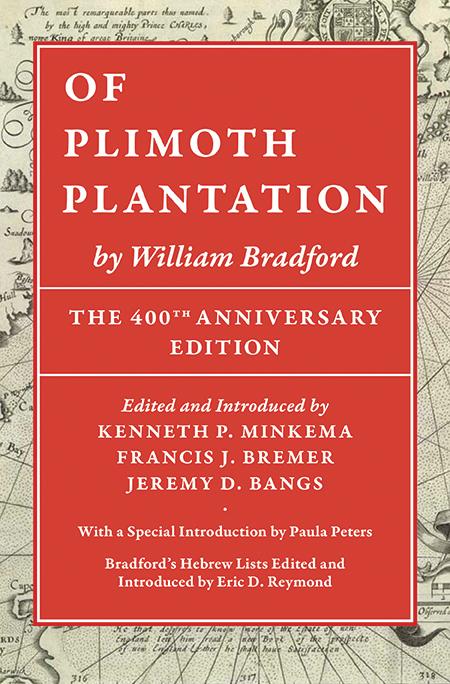 May 21, 2020—Boston, Massachusetts—In this first-of-its-kind edition of Bradford’s account of the Mayflower’s journey, its arrival in 1620, and life in the New World—published this week by American Ancestors and the Colonial Society of Massachusetts—Wampanoag, American, and Dutch scholars set the record straight about the impact of the arrival of 102 passengers to what they would call Plymouth Colony. This new book offers a fresh perspective on what took place over the first years of settlement—particularly the interactions between the Pilgrims and the Native people—in time for this year’s 400th anniversary of one of the most impactful events in world history.

This newly-annotated, 400th anniversary edition of the personal journal of Pilgrim Governor William Bradford—Of Plimoth Plantation—is the most important first-hand account in existence giving details surrounding the arrival of the people on the Mayflower and their lives in colonial America. Interpreted in various works over the centuries by numerous historians, none have directly addressed the issues of conflict between Native Americans and the settlers of Plymouth Colony until now. This new edition does so on a grand scale, with introductory material that brings together Native and non-Native commentary offering recent information and new interpretations upon traditionalist, white American, Eurocentric points-of-view.

This groundbreaking edition also restores, unabridged, much of Bradford’s original language, formatting, and notes. Earlier editions modernized the vocabulary, and relegated Bradford’s text notes, insertions, and deletions to appendices, thereby losing much of his original intent and important historical nuance. The editors provide a studied rationale for the choice of language used in this anniversary edition. And, for the first time, an effort was made by the editors to distinguish the several different inks and handwritings present in the manuscript—revealing theories upon authorship of segments and time and sequence of their creation.

The purpose of the work, according to one of its co-editors Francis Bremer, is to “continue a reassessment of ‘the meaning of Plimoth,’ as an act of faith but also an act of colonization; as a step toward a new life for some that meant the end of a way of life for others who had lived there for time immemorial; as the effort of a community to preserve its ‘sacred bond,’ but which in the process fragmented and was swept up in the larger tides of colonial and imperial appropriation.”

An introduction by contemporary Wampanoag historian Paula Peters sets this work apart from many others on the subject. Peters, a member of the Mashpee Wampanoag tribe, introduces the reader to the critical backstory of the colonization of Plymouth on Wampanoag land, and the impact of that event on the Wampanoag people throughout history, leading up to today.

In “Of Patuxet,” Peters’s introductory essay, the Native historian gives readers many opportunities to contemplate the force of history’s impact upon the Wampanoag people. Of modern-day Plymouth she writes, “On the shore between the mouth of the town brook and the state pier, a grandiose stone portico supported by Doric columns provides a canopy for a sea-level enclosure protecting a celebrated bolder. Plymouth Rock, a storied stone that legend claims was the Pilgrims’ natural wharf as they debarked the Mayflower, is the epicenter of the tourism that fuels the economy of modern-day Plymouth, Massachusetts. ‘The Rock’ is a 7,000-pound silent witness to the vitality of the indigenous lives that thrived there for as many as 12,000 years before colonization. It also serves as a monument to forgetting them. Engraved on the face of the stone, in large-point Times New Roman font, is ‘1620’.”

“It is testimony,” she adds, “to the length to which historical memory is encouraged to go to avoid knowing what came before it.”

The text of this new edition of the journal Bradford wrote during the years 1630 to 1651 has been newly-transcribed and edited—for the first time in nearly a century—from the original manuscript in Bradford’s hand that is held in the State Library of Massachusetts in Boston. Its annotations reflect new information and multidisciplinary approaches that have emerged over the past several decades.

An appendix includes the lists of Hebrew words Bradford compiled in the manuscript as he taught himself that language, edited and introduced by Eric D. Reymond, a scholar of Biblical Hebrew at Yale Divinity School. The volume is richly illustrated with images from the original manuscript and historical maps which give a deeper understanding to the settlement of Plymouth Colony in the 1620s and the geography that Bradford’s world encompassed.

The project was but one of many undertaken through a consortium called “New England Beginnings,” consisting of dozens of institutions, organizations, and individuals across the region, focused in Massachusetts, which coordinated events and publications to observe the 400th anniversary of the founding of Massachusetts, beginning with Plimoth.

“Francis J. Bremer: The Unappreciated Role of Women in the Shaping of Puritanism”

The Boston Public Library, in collaboration with American Ancestors, will present an online talk with the co-editor of this new 400th Anniversary Edition of Of Plimoth Plantation. The Boston Public Library’s annual Baxter Lecture to be held on Wednesday, June 10, will feature “Francis J. Bremer: The Unappreciated Role of Women in the Shaping of Puritanism.”

While many know of the challenge that Anne Hutchinson posed to the New England puritan establishment, the examination of roles of ordinary women in Congregationalism has been neglected. The Boston Public Library’s Baxter Lecture will focus on how women helped to shape puritan ideas, form puritan churches, teach fellow believers, and vote on various ecclesiastical issues.

The moderator of this conversation with Dr. Bremer will be Donna Curtin, Executive Director of Pilgrim Hall Museum, Plymouth, Mass.

“William Bradford and Plymouth: The View from 400 Years”

Dr. Francis J. Bremer, co-editor of the new 400th Anniversary Edition of William Bradford's Of Plimoth Plantation that has been published jointly by American Ancestors and the Colonial Society of Massachusetts, will reflect on how working on the project helped him to achieve new perspectives on Plymouth Colony, its leaders, and the Natives of early New England.

The moderator of the talk with Dr. Bremer will be Kenneth Minkema, a co-editor of the newly-published edition of Of Plimoth Plantation.

JEREMY DUPERTIUS BANGS is the Director of the Leiden American Pilgrim Museum, Leiden, the Netherlands, and the author or editor of many books and articles on modern Dutch history and on Plimoth Colony.

FRANCIS J. BREMER is Professor of History Emeritus at Millersville University, the Editor of the Winthrop Papers at Massachusetts Historical Society, and an award-winning author of numerous books and articles on puritanism.

PAULA PETERS is a journalist, educator, and activist, and a member of the Mashpee Wampanoag tribe.

To speak with any of these editors or contributors, contact Jim Power, Communications Manager at jim.power@nehgs.org or (508) 367-8058.

New England Historic Genealogical Society (NEHGS), with its national headquarters located in Boston’s Back Bay, is the oldest and largest genealogical society in America. NEHGS and its American Ancestors brand serve more than 320,000 members and millions of online users engaged in family history nationally and around the world. It is home to a world-class research library and archive, and an expert staff. NEHGS offers an award-winning genealogical research website at AmericanAncestors.org with more than 1.4 billion records and maintains a publishing division which produces original genealogical research, scholarship, and educational materials, including Mayflower Descendant, a biannual journal of Pilgrim genealogy and history.

About the Colonial Society of Massachusetts