NEHGS Offers FREE Access to All Online Databases on AmericanAncestors.org from July 10–17 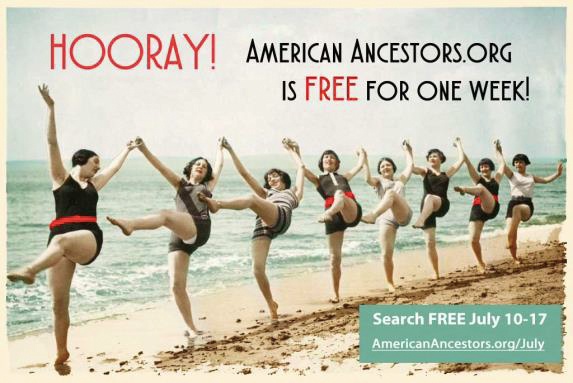 Family history is every bit as fun as a vacation on the beach. Participants in NEHGS’s summer promotion will have FREE access to all online databases on AmericanAncestors.org through Tuesday, July 17. Sign up as a Guest Member (it's free) to begin searching more than 1.4 billion names in all NEHGS databases.

July 10, 2018—Boston, Massachusetts— American Ancestors and New England Historic Genealogical Society (NEHGS) are offering FREE access to some of the most popular, new online databases in the world of family history and genealogy during a one-week, summer promotion now underway. FREE Access is being granted to all databases on AmericanAncestors.org—the award-winning website of NEHGS—from 12:01 a.m. EDST on Tuesday, July 10, through 11:59 p.m. EDST on Tuesday, July 17. This free access is granted to anyone registering as a FREE Guest Member of NEHGS at AmericanAncestors.org/July.

Included in this limited-time promotion is free access to NEHGS’s new, recently released database “Mayflower Families Fifth Generation Descendants, 1700-1880”—created through a partnership with the General Society of Mayflower Descendants (GSMD), with meticulous documentation on the Mayflower passengers who arrived in 1620 and left descendants. It is the largest online database of authenticated Pilgrim genealogies, with more than half a million searchable names.

Also included are all available records in NEHGS’s Historic Catholic Records Online Project, a multi-year collaboration with the Roman Catholic Archdiocese of Boston to create an online searchable database of millions of sacramental records from over 100 parishes across greater Boston. The project spans parish records from 1789 to 1900, a period of significant growth for the Catholic Church in Boston and surrounding towns with records predating the founding of the first Catholic Church in Boston. They document several sacraments of the Catholic Church, including baptism, confirmation, holy communion, marriage, holy orders, and the anointing of the sick. While the project will take several years to complete, images of many of the oldest records from the earlies parishes are available to browse now—after a free online registration as a Guest Member—on AmericanAncestors.org. Name-searchable records, usually available to search only with a paid membership to NEHGS, are FREE during this eight-day promotion.

Access to all online searchable databases related to the Great Migration is also included in this summer promotion from American Ancestors and NEHGS. A unique foundation of governance and religion was created by the 20,000 men, women, and children who crossed the Atlantic between 1620 and 1640, seeking opportunity and relief in New England, in the period known as the Great Migration. These are the Mayflower names, the Pilgrims, the Puritans, and the families that delight and provide rich insights for genealogists and family historians. Since 1988 NEHGS has undertaken the Great Migration Study Project, directed by Robert Charles Anderson. A total of nine searchable databases comprise the Great Migration project on AmericanAncestors.org, consisting of thousands of records—all open to the public to research FREE on AmericanAncestors.org now during these eight days.

The NEHGS website, AmericanAncestors.org, is one of the world’s most-visited family history websites and it is the most-visited genealogical society website in the country—serving more than two million visitors a year. In addition to billions of searchable names, the site offers an online learning center with courses available for genealogists of all levels. The site also features historical content from the vast library and archives of NEHGS, and an online store offering their award-winning publications.