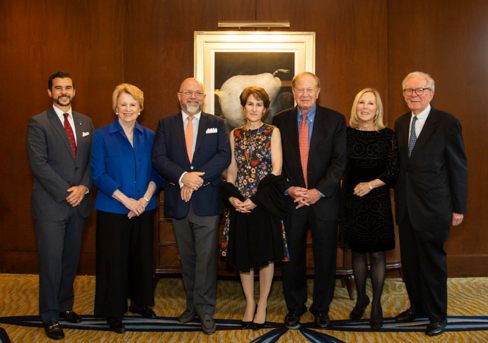 October 29, 2019—Boston, Massachusetts—On Thursday evening, October 24, 2019, New England Historic Genealogical Society (NEHGS)—known to many as American Ancestors—honored one of the nation’s leading historians and most popular authors, Joseph J. Ellis, with its coveted NEHGS Lifetime Achievement Award. Ellis is the author of many acclaimed works of American history including Founding Brothers: The Revolutionary Generation, which was awarded the Pulitzer Prize, and American Sphinx: The Character of Thomas Jefferson, which won the National Book Award.

At the organization’s fall Family History Benefit Dinner, Ellis was celebrated for his literary work and praised by Brenton Simons, President and CEO of American Ancestors. “Ellis has been hailed as the most widely-read scholar of the Revolutionary period” Simons stated, “and his contributions to our better understanding of the actions of men and of conflict at historic moments in early America are without parallel in published scholarship today.”

Following a long tradition of NEHGS, Ellis was given an expertly researched genealogy, prepared by NEHGS genealogist Ann Lawthers, and presented by President and CEO Simons. Ellis descends from German settlers of Frederick County, Maryland, with several patriots who served in the Revolutionary War—as well as from Irish emigrants from Counties Longford and Galway to Poughkeepsie, New York.

As part of the evening’s program, Stacy Schiff, also a celebrated Pulitzer Prize–winning author and a past recipient of the NEHGS Lifetime Achievement Award, engaged Ellis in a lively conversation on the relevance of the views of the founding fathers to issues in America today, the subject of the honoree’s most recent work, American Dialogue: The Founders and Us.

During the evening, two local Boston area luminaries in the cultural world were also honored for their outstanding leadership in history and preservation by American Ancestors. The American Ancestors | NEHGS Award for Outstanding Leadership in History and Preservation was presented to Vivian K. Spiro, former Board Chairman of the Associates of the Boston Public Library—as well as to Donald R. Friary, President Emeritus of Historic Deerfield and President of the Colonial Society of Massachusetts.

During the award presentation by Ryan J. Woods, Executive Vice President of American Ancestors and NEHGS, Woods emphasized Spiro’s “outstanding leadership in preserving knowledge, culture, and history for the benefit of our community, and, indeed, society at large.” Of Friary, Woods said “He is a leader, and because of his contributions, the intellectual and cultural life of the Commonwealth, and the history community on whole are all the better.”

New England Historic Genealogical Society (NEHGS)—known to many as American Ancestors—is the world’s largest nonprofit society dedicated to family history, serving more than 260,000 members and millions of online users with 1.4 billion records at AmericanAncestors.org. NEHGS was formally constituted in March of 1845 by an act of the legislature of the Commonwealth of Massachusetts and is home to a world-class research library and archive, an expert staff, offers an award-winning genealogical research website, and maintains a publishing division producing original genealogical research, scholarship, and instruction each year.