NEHGS Genealogy Reveals McCullough is Related to a Grand Family of Literary Figures, Including Some Subjects of His Award-Winning Narratives 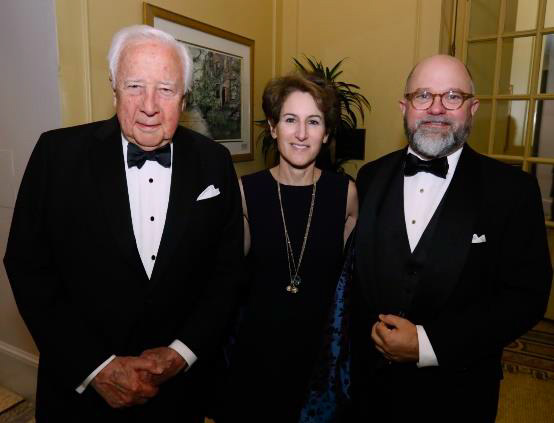 April 28, 2018—Boston, Massachusetts—On Friday, New England Historic Genealogical Society (NEHGS) brought together two Pulitzer Prize-winning authors in a sparkling tribute to one of them: author and historian David McCullough. During an evening entitled “Honoring an American Legend,” NEHGS President and CEO Brenton Simons presented McCullough with the organization’s coveted NEHGS Lifetime Achievement Award “for his unparalleled contributions to the historical narrative of our nation.” Simons later introduced the Pulitzer Prize-winning author Stacy Schiff who moderated a lively and engaging conversation with the honoree. The event was held before an overflow crowd of supporters of NEHGS at its annual Family History Benefit Dinner.

Following a long tradition, NEHGS presented McCullough with his genealogy, researched in depth by expert genealogists of the family history organization. To McCullough’s complete surprise, Simons revealed McCullough’s kinship with a grand family of literary greats—Henry Wadsworth Longfellow, Harriet Beecher Stowe, Emily Dickinson, Henry Brooks Adams, Ernest Hemingway, John Steinbeck, and Tennessee Williams. Included on his family tree, Simons announced, were leading subjects of McCullough’s published works: both wives of Theodore Roosevelt, the subject of the author’s biography of the 26th President of the United States, Mornings on Horseback (1981)—and brothers Orville and Wilbur Wright, aviators featured in his widely-acclaimed book The Wright Brothers (2015). McCullough’s stunned and spirited response to Simons was: “Amazing… I knew absolutely nothing of that.”

In a conversation with McCullough moderated by Schiff, who in 2017 also received the Lifetime Achievement Award from NEHGS, the honoree shared his experiences as a young man entering the workforce, later as professor, writer, and historian—offering insights upon projects undertaken and the surprises and challenges they presented.

New England Historic Genealogical Society, with its national headquarters located in Boston’s Back Bay, is the oldest and largest genealogical organization in America. NEHGS was formally constituted in March of 1845 by an act of the legislature of the Commonwealth of Massachusetts and now consists of more than 250,000 constituents engaged in family history nationally and around the world. It is home to a world-class research library and archive, an expert staff, offers an award-winning genealogical research website at AmericanAncestors.org, and maintains a publishing division producing original genealogical research, scholarship, and instruction each year.