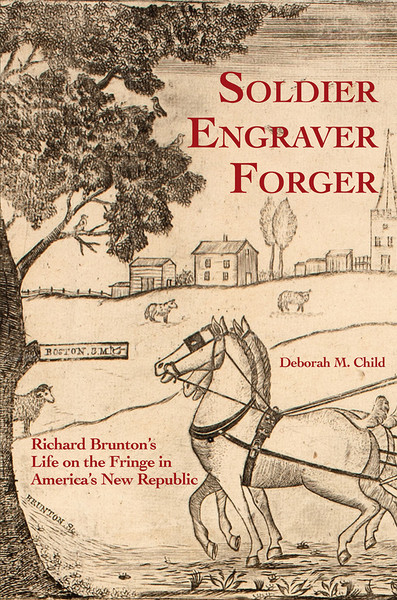 In this richly illustrated biography, the author follows in the footsteps of Richard Brunton, a British grenadier who fought in the American Revolution before deserting in 1779. A trained engraver and diesinker, his primitive but charming works include some of the earliest pre-printed family registers in America. Despite his many talents and efforts, he was never able to make an honest living from his craft. Instead, he spent years living on the fringes of society, forging and counterfeiting currency, until his death in a New England almshouse in 1832.

Deborah M. Child is an author, lecturer, and independent curator. A graduate of the Master of Arts Program at Queen’s University, Ontario, Canada, she is the author of TheSketchbooks of John Samuel Blunt (Portsmouth Athenaeum, 2007). She is also a regular contributor toAntiques and Fine Art. Her essays include: “A Portrait to Be Treasured Once Again: A Copley Pastel of a Boston Maiden,” “Thank Goodness for Granny Notes: Rufus Porter and His New England Sitters,” and “Samuel Jordan: Artist, Thief, Villain.” She is now writing about another engraver of counterfeit banknotes who also spent time in the Massachusetts State Prison—and who may well have got his first lessons in engraving bank notes from Richard Brunton. Child lives in New Hampshire.

The founding genealogical society in America, New England Historic Genealogical Society was established in 1845. Today it has a national collecting scope and serves 100,000 constituents through an award-winning website www.AmericanAncestors.org.