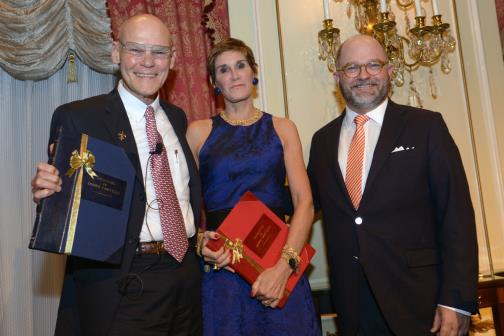 These and other ancestral surprises were revealed on Friday evening by NEHGS at its annual Family History Benefit Dinner—one of Boston’s premier social and charitable events. Matalin and Carville were honored with the organization’s highest award, preservation of family history in America. Wellknown individually and as one of the nation’s most intriguing and powerful married couples for their service on the American political scene, Matalin and Carville are one of the nation’s most politically opposed, ideologically mismatched, and intensely opinionated couples. By tracing their family history and revealing some whimsical and surprising ancestry behind the Matalin and Carville families, NEHGS regaled the couple with material for contemplation, laughter, and tears for years to come.

Matalin is an 11th cousin once removed of Barack Obama, as revealed by NEHGS President and CEO D. Brenton Simons. But she also shares a kinship with her former boss, the 41st President of the U.S. George W. Bush, as well as with former Vice President Dick Cheney. Other Matalin ancestors include founders of New England, a passenger on the Mayflower, and a woman once accused of witchcraft in colonial Massachusetts.

Carville learned from Simons that, in addition to being a 10th cousin of actress and humanitarian Angelina Jolie, he shares the family tree with singer and songwriter Celine Dion—along with a relationship to the late Prime Minister of Canada Pierre Elliott Trudeau. Carville descends from a long line of French and German settlers of Canada, the Illinois Territory, and Louisiana.

In his presentation of the Lifetime Achievement Award to the couple, President and CEO Simons recalled the tradition of NEHGS to pay public tribute to important figures who represent some of the best contributions to our understanding of family in the nation’s past, present, and future. “One hundred and seventy years after our founding, NEHGS continues its commitment to document a significant part of our nation’s history through the celebration of remarkable individuals who have made an indelible contribution to our understanding of family in America,” commented Simons. “Mary Matalin and James Carville embody that example. Through the often entertaining dynamic that their very public relationship has brought to the nation’s eye—in the White House, as well as in their own hometown—they have won the hearts of people everywhere who love to be reminded that family unity is possible among even the most unlikely personalities.”

Following the award presentation, Matalin and Carville spoke to a large crowd gathered at the Taj Hotel in Boston on “Our American Heritage,” noting their adventures as a couple making differences yield to success, interweaving love and family into a fabric of unity and service.