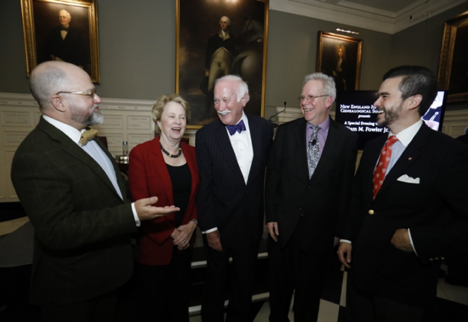 January 26, 2018—Boston, Massachusetts—On Thursday, January 25, 2018, New England Historic Genealogical Society (NEHGS) honored the vision and leadership of renowned historian and author William M. Fowler, Jr., a tireless contributor to the appreciation of American history, on the same day that Boston Mayor Martin J. Walsh proclaimed William M. Fowler, Jr. Day throughout the City of Boston. At a NEHGS Family History Benefit Dinner in Boston last evening, Fowler was presented with the NEHGS Lifetime Achievement Award and hailed for his many contributions in the fields of history and biography.

NEHGS President and CEO Brenton Simons presented Fowler with the NEHGS award and recalled that "As chairman of the Board of Trustees of the New England Historic Genealogical Society from 1991-1996, Fowler brought renewed energy to NEHGS and modernization to the Society's facilities-pioneering efforts to launch NEHGS into the digital age. During his tenure he was instrumental in the launching of the Great Migration Study Project and spearheaded the organization's 150th anniversary celebration in 1995."

Simons added, "A titan of historical scholarship and a craftsman of its instruction, Bill Fowler has helped foster the collaboration between genealogists and historians worldwide to create scholarship to advance both fields of research." Fowler continues to serve on the NEHGS Board of Trustees as Trustee Emeritus.

William M. Fowler, Jr.'s expertise in naval lore and naval history, combined with his skills from a distinguished career at Northeastern University, have brought him recognition and acclaim. Fowler retired in 2017 as Distinguished Professor of History at Northeastern University. He is former executive director of the Massachusetts Historical Society, and the former editor of The New England Quarterly. His books include Rebels Under Sail: The Navy in the Revolution and The Baron of Beacon Hill: A Biography of John Hancock. His most recent book is Steam Titans (2017), the story of the epic competition between shipping magnates Samuel Cunard and Edward Collins for mid-19th century control of the Atlantic. He is a Fellow of the Massachusetts Historical Society and the Pilgrim Society, and received an honorary degree from Northeastern University in 2000. 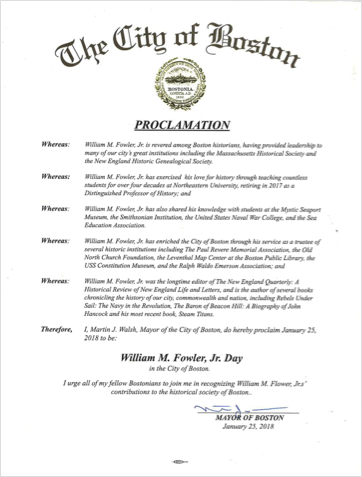 In tribute to Fowler's distinguished career, the Mayor of the City of Boston proclaimed Thursday, January 25, to be William M. Fowler, Jr. Day throughout the City of Boston. A framed parchment of the proclamation was presented to Fowler on behalf of the Mayor and the City, noting Fowler to be "a giant among Boston historians…" and encouraging fellow Bostonians to join "in celebrating his legacy of illuminating history for countless people throughout his distinguished career."

NEHGS, with its national headquarters located in Boston's Back Bay, is the oldest and largest genealogical society in America. NEHGS was formally constituted in March of 1845 by an act of the legislature of the Commonwealth of Massachusetts and now consists of more than 250,000 constituents engaged in family history nationally and around the world. It is home to a world-class research library and archive, and an expert staff. NEHGS offers an award-winning genealogical research website at AmericanAncestors.org and maintains a publishing division which produces original genealogical research, scholarship, and educational materials.