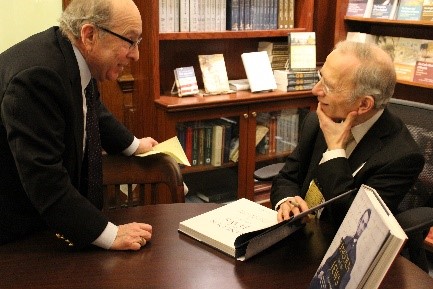 (Above) Sarna chats with guest

April 7, 2016—Boston, Massachusetts— On the evening of April 6, the New England Historic Genealogical Society launched The Jewish Heritage Center while hosting the Boston book launch of Lincoln and the Jews: A History. Almost 100 guests attended this landmark event at the NEHGS headquarters on Newbury Street in Boston. During the event, Brandeis University Professor Jonathan Sarna spoke about his book Lincoln and the Jews: A History, and afterwards had a lively open conversation with Combined Jewish Philanthropies (CJP) President Barry Shrage. Event sponsors Justin and Genevieve Wyner, Lionel and Vivian Spiro, and Eric and Teddy Roiter were on hand to take part in this historic evening.

NEHGS CEO D. Brenton Simons opened the evening by saying, “This is an important moment in the Society’s one-hundred-seventy-one year history as we launch The Jewish Heritage Center as a leading institution for Jewish history, genealogy, and community preservation.” In 2010, American Jewish Historical Society–New England Archives (AJHS–NEA) and NEHGS launched a collaboration designed to enhance Jewish historical and genealogical research and the continued collection and preservation of Jewish history. The Jewish Heritage Center, with the AJHS–NEA as its cornerstone, engages historians, genealogists, youth, and the general public in programming and research, connecting people through its scholarship, collections, and expertise. Learn more about the Jewish Heritage Center at AmericanAncestors.org/jhc.

Jonathan D. Sarna is the Joseph H. and Belle R. Braun Professor of American Jewish History in the department of Near Eastern and Judaic Studies at Brandeis University and director of its Hornstein Jewish Professional Leadership Program.

Barry Shrage has served as president of CJP–Greater Boston’s Jewish Federation since 1987. Under his leadership, CJP has focused on three priorities: Jewish education and engaging future generations, strengthening our connection to Israel through community-to-community and people-to-people partnerships, and caring for the most vulnerable in Greater Boston. He champions true partnerships between CJP, donors, and recipient organizations—inspiring the Jewish community to contribute more than $55 million to CJP’s 2015 Annual Campaign.

About Lincoln and the Jews: A History

One hundred and fifty years after Abraham Lincoln’s death, Jonathan Sarna tells the full story of his extraordinary relationship with Jews for the first time. Rare manuscripts and images, many from the Shapell Lincoln Collection, show Lincoln in a way he has never been seen before. This groundbreaking work, the product of meticulous research, reveals how Lincoln’s remarkable relationship with American Jews had an impact on both his path to the presidency and his policy decisions as president. This previously unknown feature of Abraham Lincoln's life broadened him, and, as a result, broadened America.

Lincoln and the Jews: A History can be purchased on Amazon.com.