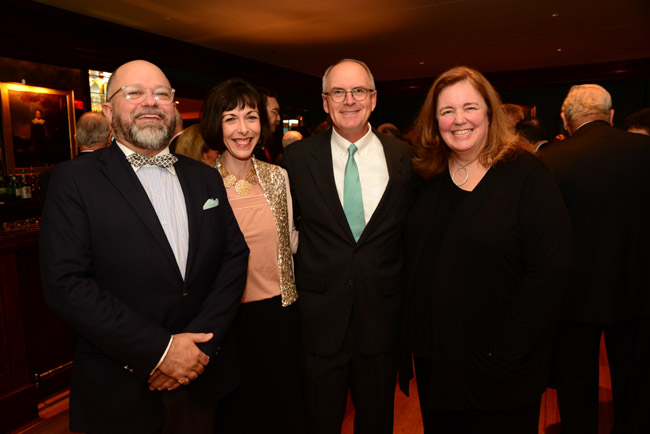 October 22, 2015—Boston, Massachusetts—New England Historic Genealogical Society (NEHGS), the nation’s oldest and largest genealogical institution, celebrated two important milestones this evening at a Boston Dinner Gala honoring the author Nathaniel Philbrick. At the gathering marking the 170th anniversary of its founding, NEHGS announced the surpassing of an ambitious $55 million goal for its comprehensive capital campaign. The event was highlighted by the presentation of the NEHGS Lifetime Achievement Award to eminent historian and bestselling author Nathaniel Philbrick, revealing secrets of his own family ties to another literary great who had inspired his work, Herman Melville—author of Moby Dick.

NEHGS, with its national headquarters located in Boston’s Back Bay, is celebrating its 170th Anniversary throughout 2015. As the founding genealogical institution in America, NEHGS was formally constituted in March of 1845 by an act of the legislature of the Commonwealth of Massachusetts and now serves more than 130,000 constituents engaged in family history nationally and around the world. It is home to a world-class research library and archive with an expert staff, offers an award-winning genealogical research website at AmericanAncestors.org, and maintains a publishing division that produces original genealogical research, scholarship, and instruction each year.

In October of this year, NEHGS surpassed its goal in a $55 million comprehensive capital campaign, Connecting Families, Advancing History, achieving a record-setting amount of more than $56,600,000. Through the campaign launched in 2008, NEHGS acquired a building adjacent to its Newbury Street location for the future expansion of its headquarters and supported a major website initiative that has added more than two billion new records to the Society’s award-winning website, AmericanAncestors.org. The campaign has also significantly increased the Society’s substantial endowment and contributed new acquisitions to its unique materials collection.

In remarks celebrating the milestones, NEHGS President and CEO Brenton Simons said, “In March 1845 something remarkable happened in Boston that would impact countless lives for centuries to come: the first genealogical institution in the Western world, the New England Historic Genealogical Society, was founded. Today, the study of genealogy touches millions of lives and connects people of varied backgrounds and histories. We have been driven by a consistent mission: to serve people, to preserve records, and to create a system for recording and sharing family history.“170 years later, the spirit of our charge remains the same,” Simons added. “Proud of our long history as the most respected name in genealogy, and of our many accomplishments, we dedicate this celebration to our members, donors, friends, and colleagues, and leaders past and present who made a reality of their ‘farseeing vision’ of creating the nation’s greatest genealogical society.”

In a gesture that demonstrates the unique research expertise of NEHGS, during the ceremonies Simons presented the Society’s Lifetime Achievement Award to Nathaniel Philbrick, revealing Philbrick’s previously unknown family relationship to the American novelist Herman Melville, author of Moby Dick (1851), and a host of other famous authors, including Doris Kearns Goodwin, Ralph Waldo Emerson, Henry Wadsworth Longfellow, and Tennessee Williams.

Philbrick is the author of many books including In the Heart of the Sea, the 2000 National Book Award winner based on the true story that helped inspire Melville’s classic Moby Dick. NEHGS staff genealogists uncovered Philbrick’s unique connection to Melville and other authors as they researched the honoree’s family history and documented his relationships in a beautifully designed and bound volume, presented to him by Simons. In the Heart of the Sea will be released nationally as a major motion picture by Warner Bros. Pictures in December 2015, directed by Oscar-winner Ron Howard.

Other bestsellers by Philbrick include Mayflower: A Story of Courage, Community, and War and The Last Stand: Custer, Sitting Bull, and the Battle of the Little Bighorn. His bestselling book Bunker Hill: A City, A Siege, A Revolution was published in 2013.