The event will be emceed by CNBC personality Bill Griffeth 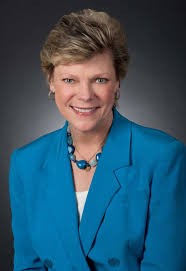 October 4, 2016—Boston, Massachusetts— On the evening of Thursday, October 27, 2016, NEHGS will honor Cokie Roberts, the distinguished journalist and bestselling author, with its Lifetime Achievement Award in History and Biography at the Fall Family History Benefit Dinner in Boston. Serving as emcee will be Bill Griffeth, co-anchor of Closing Bell on CNBC, and treasurer of NEHGS.

Cokie Roberts is the author of several New York Times bestsellers and highly acclaimed books focusing on women in American history, including Capital Dames: The Civil War and the Women of Washington, 1848-1868 (2015), Ladies of Liberty (2009), Founding Mothers: The Women Who Raised Our Nation (2004), and We are Our Mothers’ Daughters (1998). Along with her husband and fellow journalist, Steven V. Roberts, she is also the co-author of two memoirs, From This Day Forward (2009) and Our Haggadah: Uniting Traditions for Interfaith Families (2011).

In more than forty years in broadcasting, Cokie Roberts has won countless awards, including three Emmys, the Edward R. Murrow Award, and the Everett McKinley Dirksen Award for Distinguished Reporting of Congress. She has been inducted into the Broadcasting and Cable Hall of Fame and was cited by the American Women in Radio and Television as one of the fifty greatest women in the history of broadcasting. The Library of Congress has named her a “Living Legend,” one of very few Americans to have attained that remarkable honor.

A senior news analyst for National Public Radio’s Morning Edition and the author, with her husband Steven, of a weekly column syndicated in newspapers across the United States, she is widely recognized for her longtime affiliation with the This Week Sunday morning news interview show on ABC-TV. She is a regular round-table analyst for This Week with George Stephanopoulos and was co-anchor of This Week with Sam Donaldson & Cokie Roberts from 1996 to 2002, while serving as congressional analyst for ABC News and reporting for World News Tonight and other broadcasts for the same network. Previously, she was a contributor to The MacNeil/Lehrer NewsHour, for which she won the Edward Weintal Prize for Diplomatic Reporting in 1988 for her coverage of the Iran-Contra Affair.

Born in New Orleans, Louisiana, she is the daughter of the late Hale Boggs, who was a Democratic Congressman from Louisiana, a Majority Leader in the House of Representatives, and a member of the Warren Commission. Her mother, the late Lindy Boggs, was a longtime Congresswoman from Louisiana and an Ambassador to the Holy See.

The Fall Family History Benefit Dinner will also feature a Patron & Benefactor Reception which will host the Boston launch of emcee Bill Griffeth’s book, Stranger in My Genes: A Memoir. Released in September by NEHGS and University Press of New England, the book tells the riveting story of how Griffeth, a well-respected financial journalist, co-anchor ofClosing Bell on CNBC, and NEHGS Trustee, had many years of genealogical research called into question by a simple DNA test.

For more information about the event or for ticket purchases, please visit http://www.americanancestors.org/fall-dinner.

The founding genealogical society in America, New England Historic Genealogical Society (NEHGS) was established in 1845. Today it has a national collecting scope and serves more than 200,000 constituents through an award-winning website, www.AmericanAncestors.org. Since 1845, NEHGS has been the country’s leading comprehensive resource for genealogists and family historians of every skill level. Today NEHGS provides constituents with worldwide access to some of the most important and valuable research tools anywhere.

American Ancestors is the public brand and user experience of NEHGS representing the expertise and resources available for family historians of all levels when researching their origins across the country and around the world. NEHGS’s resources, expertise, and service are unmatched in the field and their leading staff of on-site and online genealogists includes experts in early American, Irish, English, Scottish, Italian, Atlantic and French Canadian, African American, Native American, Chinese, and Jewish research. Expert assistance is available to members and nonmembers in a variety of ways. The NEHGS library and archive, located at 99-101 Newbury Street in downtown Boston, Massachusetts is home to more than 28 million items, including manuscript documents, genealogical records, books, photographs, and other items dating back hundreds of years.