Genealogists at New England Historic Genealogical Society Announce She Was Related to Ten Presidents, Including her Husband, and to Prince William 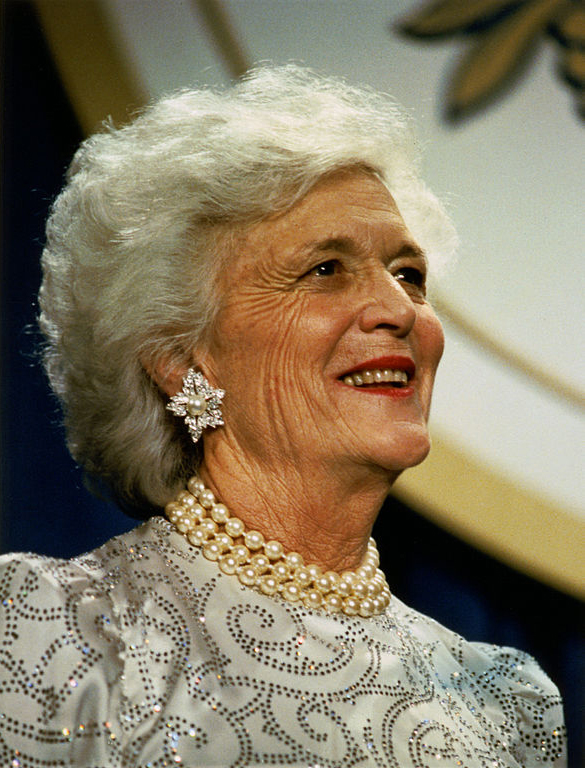 April 19, 2018—Boston, Massachusetts—As the nation mourned the passing of one of its most-beloved American First Ladies, the New England Historic Genealogical Society (NEHGS) remembered Barbara Pierce Bush, a woman whose life will be noted as one of only two in the nation’s history to be both the wife and mother of an American President, and who was related to ten presidents (including her husband and son) and to European royalty. Her funeral is set for Saturday.

Genealogists at NEHGS have long studied the ancestry of Barbara Bush, who was related to millions of present-day Americans. Among researchers at NEHGS is world renowned genealogist Gary Boyd Roberts, Senior Research Scholar Emeritus, who has documented the family history of the late Mrs. Bush extensively.

“Barbara Bush was related to ten U.S. Presidents. She had an ancestor on the Mayflower, and was descended from three seventeenth-century immigrants with royal ancestry,” said Roberts. The ten presidents were Franklin Pierce (a second cousin five times removed), Hayes, Garfield, Taft, Coolidge, Hoover, Nixon, Ford, and, most surprisingly, she had distant genealogical kinship with George H. W. Bush, her husband, and George W. Bush, her son. All were Republicans except for President Pierce. It has frequently been reported erroneously in the press that Mrs. Bush was descended directly from President Pierce, but the kinship was more remote.

“Mrs. Bush was descended from the Mayflower passenger Henry Samson whose ancestry has been traced to a noble Latimer/Latymer family and she is therefore distantly related to Prince William of Wales, the future King of England,” continued Roberts.

Gary Boyd Roberts is Senior Research Scholar Emeritus at New England Historic Genealogical Society, with which he has been associated since 1974. He is the author of American Ancestors and Cousins of The Princess of Wales; The Royal Descents of 600 Immigrants to the American Colonies of the United States; Notable Kin, volumes one and two; The Best Genealogical Sources in Print, volume one, and many magazine and journal articles and columns.

NEHGS, with its national headquarters located in Boston’s Back Bay, is the oldest and largest genealogical society in America. NEHGS serves more than 250,000 members and millions of online users engaged in family history nationally and around the world. It is home to a world-class research library and archive, and an expert staff. NEHGS offers an award-winning genealogical research website at AmericanAncestors.org with 1.4 billion records and maintains a publishing division which produces original genealogical research, scholarship, and educational materials, including the Mayflower Descendant, a quarterly journal of Pilgrim genealogy and history.